Every year the Fundamental Rights Conference brings together the key fundamental rights actors in the EU to examine a specific fundamental rights issue, stimulating the debate on challenges that exist and exploring solutions on how these could be overcome. 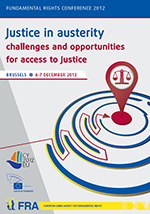 Dignity and rights of irregular migrants

The conference was organised in cooperation with the Polish Presidency of the Council of the European Union and discussed how to improve access to fundamental rights for migrants in an irregular situation, namely of those persons without authorisation to stay in the EU. The discussions were drawing on FRA’s EU-wide research on the situation of migrants in an irregular situation, which was published in the run-up to the conference. The conference discussions underlined the importance of applying a fundamental rights approach in migration management and offered a number of practical suggestions to facilitate access to justice, respect the right to education and health, preserve the best interests of the child, combat labour exploitation, reduce the use of immigration detention, and end situations of legal limbo for persons who are not removed.

Ensuring justice and protection for all children

The previous FRC, held in Brussels on 7 -8 December 2010, stimulated the debate on challenges and strategies to protect particularly vulnerable children and deliver child-friendly justice in the European Union.

The emphasis during this conference was on exploring avenues for Member State authorities to better protect vulnerable children by following an integrated approach to child protection and involving civil society and children themselves.

Making rights a reality for all

Making rights a reality for all was the theme of the FRC 2009 which was held in cooperation with the Swedish Presidency of the EU in Stockholm on 10-11 December 2009.

The focus was on identifying solutions to protect and promote the rights of marginalised groups which are most vulnerable to discrimination and exclusion in the EU.

Freedom of expression, a cornerstone of democracy - listening and communicating in a diverse Europe

The event examined key issues and challenges related to freedom of expression. Entitled "Freedom of expression, a cornerstone of democracy - listening and communicating in a diverse Europe", the conference aimed to contribute to policy and action within the European Union and to help shape the evolving space for communication among Europeans.