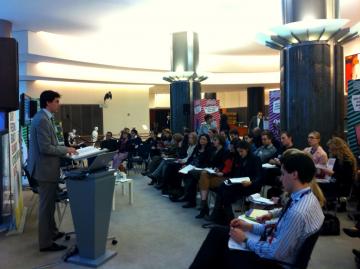 The event was co-hosted by the FRA and ARDI Chair Emine Bozkurt MEP. The panel discussion brought the FRA together with key institutional actors working to combat hate crime in Europe and beyond: the Parliament, the European Commission, the OSCE Office for Democratic Institutions and Human Rights (ODIHR), equality bodies and civil society organisations concerned with a variety of areas (racism, xenophobia, LGBT, disability).

The two FRA reports point out that hate crimes are a reality in the EU and present a threat to many individuals, and to society as a whole. Despite this, they are under-reported across EU Member States. National authorities should do more to make hate crime visible and acknowledge victims’ rights, through better recording and prosecution of these crimes.

In her opening remarks, MEP Bozkurt stated that “EU Member States have the responsibility to protect fundamental rights - human dignity and non discrimination - and need to make sure that people who violate these rights are brought to account. This cannot be done without concrete and viable data, which is collected and published. Only by collecting and publishing data, you can make known to the world that hate crime will not go by unnoticed and better public policy to address the issue can be made.”

The FRA presentation focused on the specificity of hate crime and what kind of response it requires from policy actors, law enforcement agencies and criminal justice systems. Action is needed at the levels of legislation, policy and practice.

The OSCE/ODIHR noted that more needs to be done. States have made efforts to combat hate crime, but nonetheless it is necessary to raise awareness, and to build the capacities of criminal justice agencies. ODIHR conducts various programmes in this field and has produced a number of guidelines and tools to assist EU Member States.

The Commission spoke about the existing EU legislation in the area, the Council Framework Decision on Racism and Xenophobia and its implications at the Member States’ level, with a particular focus on hate speech.

MEP Livia Jaroka talked about how hate crime is a particular problem for Roma, emphasising that there is very little trust in the police among Roma populations throughout Europe, and that the murders of Roma persons remain unaddressed.

A shared conclusion was that actions can be taken at the level of legislation, policy and practices to increase the visibility of hate crime and allow victims to seek redress.