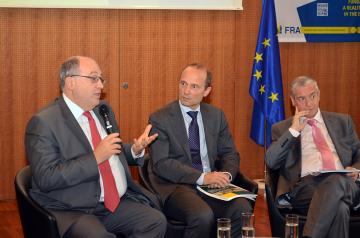 f.l.t.r: Ariel Muzicant, Board member of the European Jewish Congress, Morten Kjaerum, FRA Director, Serge Cwajgenbaum, Secretary General, European Jewish Congress
FRA
“Fear drains people’s strength, preventing them from living their lives openly, as each of us as the right to do,” said FRA Director Morten Kjaerum at the launch of the Agency’s report on antisemitism on 8 November.

“Hate crime does lasting damage to entire communities, but such offences too often remain unrecognised, unprosecuted and therefore invisible. If a person is targeted just because they are Jewish, the entire community becomes afraid that they might be next.”, he continued.

The FRA report is based on a survey of Jewish communities in eight EU Member States – France, Belgium, the UK, Germany, Sweden, Italy, Hungary and Latvia – and details their experiences and perceptions of antisemitism. One of the most striking results was the fear that Jewish communities suffer on an everyday basis, the Director said.

This is evident in the high number of respondents who said they would not wear or display any Jewish symbols such as a Star of David on the street, or even considered emigrating because of safety concerns.

Another finding highlighted by the Director was the prevalence of antisemitism on the internet. FRA recommends that school curricula include a list of good practices for young people on what tone and vocabulary are acceptable, and how to make negative comments without becoming abusive.

“Reading the report, we can really see how important it is to talk to the Jewish communities in Europe today about their lives, their experiences and their fears. This is what human rights are all about – the individual.”

The FRA Director closed the press briefing by saying: “This is a clear signal that there is a lot we need to do at all levels of society, from the very top political level, through the ministries, through people at the municipalities, to people at the local level, people involved in education, working in schools. All of us should read this report and ask themselves: ‘What can I do better?’”