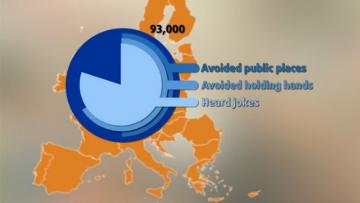 “A too great number of LGBT people across Europe are being barred from being themselves. Their ability to enjoy their basic human right of living with dignity, to enjoy life and express themselves freely without discrimination, is being denied.”

FRA Director Morten Kjaerum held a speech in The Hague on the 17th May, presenting the launch of the EU LGBT Survey Report . The survey was carried out online and asked over 93,000 LGBT people across all 27 EU Member States and Croatia about their experiences of violence and discrimination. The results show that many lesbian, gay, bisexual and transgender people (LGBT) cannot be themselves in their daily lives.

According to the data collected, LGBT people start facing difficulties early at school, where they regularly experience bullying and harassment. For this reason, anti-bullying policies should be developed and implemented and teachers should be trained about how to better tackle bullying against LGBT students.

FRA research also shows that LGBT people face discrimination in many other walks of life, including work, housing, social services, and in access to goods and services. About half of all respondents had personally felt discriminated against or harassed in the year before the survey because they were LGBT.

Morten Kjaerum: “What is even more worrying is that LGBT people are frequently victims of hate crime and harassment. About a quarter of all respondents said they had been attacked or threatened with violence in the last five years. High levels of under-reporting were also detected: just 22% of the most serious violent incidents against LGBT people in the five year preceding the survey were reported to the police.”

These experiences of hate and discrimination result in LGBT people living in fear: two thirds of the respondents across all EU Member States were scared of holding hands in public with their same-sex partner. For gay and bisexual men this rose to about 75%.

“These figures stress the need for EU-wide and Member State action to counter the many obstacles LGBT people face in the enjoyment of their basic rights in everyday life,” said the Director at the end of his speech, and  emphasised that there is a clear need for political leadership and EU-wide action as a catalyst for change.