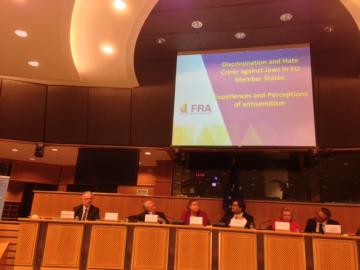 The meeting brought together some 100 participants, including Members of the European Parliament and national parliaments, the European Commission, government representatives, civil society organizations working in the field of combating hate crimes, including from Muslim, Roma and EU-based human rights networks. FRA’s results raised participants' awareness on a number of challenges faced by Jewish people in Europe and on the persistent level of hate crimes.

"Antisemitism in the EU appears to be widespread, according to findings from FRA’s survey among Jews. In the eight countries surveyed, about three quarters believe that antisemitism is worse now than it was five years ago, particularly online. Many have personally experienced antisemitic hate crime and harassment. This FRA report seeks to help put an end to the worry many Jews feel for simply being themselves," said Ioannis Dimitrakopoulos, Head of Equality and Citizens’ Rights Department at the FRA.

The presentation triggered a lively debate. The European Commission expressed support for the findings and said that civil society actions, advocacy and training activities to combat antisemitism can be undertaken under the current call for proposals on the Fundamental Rights and Citizenship programme - Action grants 2013, which is open until 12 March 2014.