Anniversary reminds us of how antisemitism persists today 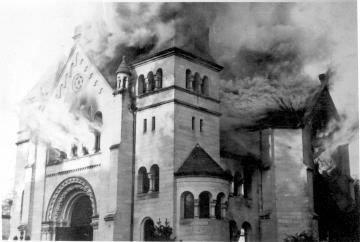 Baden Baden synagogue goes up in flames on Kristallnacht, 10 November 1938.
Yad Vashem
Across the EU, antisemitism continues to haunt Europe some 75 years after the anti-Jewish ‘Kristallnacht’ pogroms took place, despite sustained efforts by Member States to tackle this issue.

“Antisemitism remains at worrying levels across Europe despite the many attempts to combat it. As we come together to remember the horrors of the past, it is perhaps time to reflect what more needs to be done to stem the centuries-long persecution of Jews,” said FRA Director Morten Kjaerum to mark the 9 November anniversary of the anti-Jewish pogroms. “EU and national policy makers must continue their long fight against antisemitism with more targeted measures to tackle antisemitism as it exists today.”

Last year, FRA presented the first comparable figures on Jewish people’s experiences of antisemitic harassment, discrimination and hate crime in the EU. It revealed how antisemitism is still widespread in the EU today. For example, 66% of respondents considered antisemitism to be a major problem in their countries, particularly online. 76% said the situation had become more acute over the last five years. In addition, 21% of all respondents have experienced an antisemitic incident or incidents involving verbal insult, harassment or a physical attack in the 12 months before the survey.

One year on and it appears from community leaders and media reports that antisemitism continues to persist in many Member States. This appears to be partly fuelled by the Israeli-Palestinian conflict and other factors that seem to be normalising antisemitic feelings in today’s society.

Government and community leaders of different religious groups have all called for an end to antisemitism, with some countries pledging extra funds to secure Jewish congregations and sites.

The EU and its Member States need to target their measures for combating antisemitism, particularly the growing phenomenon of antisemitism online. Recording Jewish people’s experiences of fundamental rights violations effectively and comprehensively would serve to gauge the extent of the problem and help policy makers formulate appropriate responses.