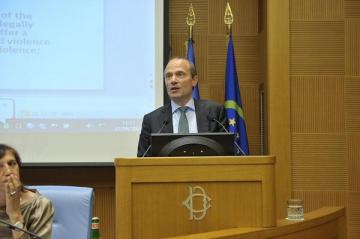 Morten Kjaerum speaking at the conference ‘Safe from fear, safe from violence’
Copyright: Camera dei deputati 2014
FRA Director Morten Kjaerum participated in a conference to celebrate the entry into force of the Istanbul Convention, the Council of Europe’s convention on preventing and combating violence against women and domestic violence.

He began by stressing that the Istanbul Convention offers an entire region legally binding standards for the first time on combating violence against women, highlighting the fact that the Convention:

“These and many other provisions in the Convention will in turn help towards the change in mentality we need in order to fight violence against women effectively and lastingly,” the Director said.

Listing a number of findings from FRA’s violence against women survey of 42,000 women throughout the EU, he cited the fact that an estimated 13 million women in the EU had been victims of physical violence in the course of the 12 months prior to our survey.

FRA’s Director then went on to emphasise the significance of the problem of cyberharassment, which the Agency’s findings have shown affect 20% of women in the EU between the ages of 18 and 29. In addition, he underlined the fact that the widespread prevalence of violence against women generates a sense of fear that stops women from living their lives freely.

Two aspects of work that still urgently needs to be done in order to combat violence against women effectively and lastingly were mentioned. One of these is the necessity of establishing a multi-agency approach that establishes and enhances cooperation between the police, employers, doctors and other health professionals, as well as internet service providers. The second is the necessity of recognising the importance of gender equality in the debate on combating gender-based violence against women, and how important it is to include the role of men in the debate.

“The role of men, not just as perpetrators of violence against women but also in society more broadly, obviously needs to be explored in more detail,” FRA’s Director said. “Above all we need a public debate stressing that hassling, harassing or hitting women is NOT attractive, it is NOT manly and it is NOT acceptable.”

The speech ended by calling for a review of the implementation of the Istanbul Convention when enough time has elapsed. This would enable us to observe whether offences have decreased, police have become more sensitive to the issue of violence against women, and more men and boys are aware of the reasons behind and damaging effects of violence against women, leading to a long-term change in attitudes and greater gender equality across the board.