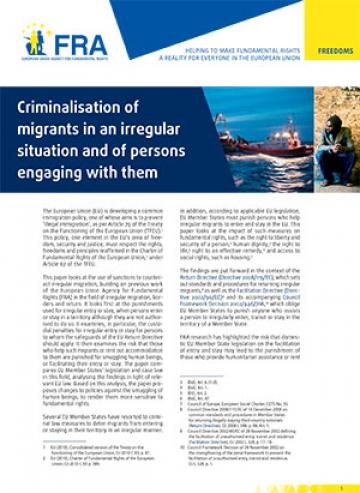 FRA 2014
A new paper by the European Union Agency for Fundamental Rights (FRA) examines measures in EU Member States to counter irregular migration and their compatibility with fundamental rights.

Access the Paper: Criminalisation of migrants in an irregular situation and of persons engaging with them >>

The paper is part of FRA's ongoing work in the area of asylum and migration. It is also a contribution to the evaluation and possible modification of EU legislation on assisting unauthorised entry. This is an important aspect of the European Commission’s ‘Task Force Mediterranean’, which was set up following the deaths of almost 400 people off the Italian island of Lampedusa in October 2013.

Because of a real or perceived danger of detection, migrants in an irregular situation are often too afraid to use medical facilities, send their children to school, register their children’s births or attend religious services. If the state encourages the general public to report migrants in an irregular situation to the immigration authorities, this will drive migrants further underground, depriving them of access to public services and making them more vulnerable to exploitation and abuse.

Criminalisation harms not only the migrants themselves, but also those who support them, such as providers of humanitarian or legal assistance, or people who rescue migrants in distress at sea. For example, fishermen fear punishment for rescuing migrants at sea, a fact that was widely reported following the Lampedusa tragedy. In addition, landlords may be punished for renting accommodation to irregular migrants.

FRA’s findings are described in the context of the Return Directive, as well as the Facilitation Directive and accompanying regulations that oblige EU Member States to punish anyone who assists a person to enter, pass through or remain on EU territory in an irregular manner.

The Paper contains several recommendations that aim to ensure the treatment of irregular migrants entering and living in the EU is in line with the Union’s fundamental rights standards. For example: