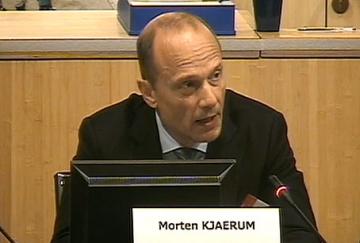 As the EU discussed all aspects of its internal security strategy ranging from the impact of cybercrime to preventing terrorism and addressing radicalisation, respect for fundamental rights was a cross-cutting theme of the conference. It was held after the UN Security Council recently passed a resolution condemning violent extremism and underscoring the need to tackle the issue of foreign fighters.

The FRA Director set out how the changes in the fundamental rights landscape in the EU mean that more than ever, there is a need to ensure that polices on internal security are fundamental rights compliant. These changes include the ongoing negotiations on accession to the European Convention on Human Rights, the reform of the data protection regime and the end of the transitional period for the third pillar – police and judicial cooperation in criminal matters.

In addition, the Commission-elect has highlighted the importance it attaches to the Charter of Fundamental Rights and the rule of law. It has tasked the First Vice-President of the European Commission elect to ensure that every Commission proposal or initiative complies with the Charter. The First Vice-President will also be tasked with leading the dialogue between the European Commission and churches and religious associations or communities.

Three topical issues were highlighted by the Director to demonstrate the importance of integrating fundamental rights. These were use of Passenger Name Record information for law enforcement purposes; measures taken vis-à-vis foreign fighters; and the large scale surveillance of digital communication by intelligence services. He said that safeguarding people means safeguarding their rights and that fundamental rights and security are two sides of the same coin.

He also added that trust is key to successful policy outcomes and fundamental rights can help build trust. This is trust in the authorities, trust in the policies and trust in the police and judicial system. The issue of trust is closely linked to legitimacy and the broader context of social cohesion.

Given the impact on ethnic and religious communities in the EU in particular, he said that tackling hate crime, combating racial discrimination and socially including citizens of ethnic and religious minority background must be part of a comprehensive and multi-agency approach to a range of issues related to internal security.

As the European Commission prepares for adoption of the renewed internal security strategy in 2015, the conference serves as a key component of the consultation process. Participants include governments, European parliamentarians, the private sector, civil society and the research sector.