More to be done to ensure respect for fundamental rights in EU, says FRA Director 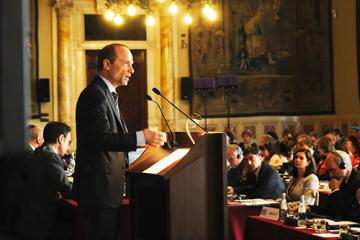 Italian Chamber of Deputies, Rome
Laboratorio fotografico chigi - CC BY-NC-SA 2.0
While the European Union has achieved a great deal in the area of fundamental rights, the violations that take place demonstrate the fact that there is still much to be done, FRA Director Morten Kjaerum said at an international conference entitled What Europe stands for. Growth, jobs and rights: will the European Union rise to the occasion? on 14 March 2014 in Rome.

The Director pointed out that the EU and its Member States are in a period of transition from a period of political trust to one of scepticism, as the economic crisis, a loss of faith in our democratic systems, a sense of growing inequality and injustice, and the negative experiences of a number of minority groups take their toll.

Recent findings by the Fundamental Rights Agency illustrate this point:

Moving on to three key topics that are of particular concern to EU citizens at present, the Director emphasised that the right to free movement is a benefit both to EU citizens and to the EU economy. It is therefore important that the fundamental right to freedom of movement is protected in order to allow companies seek the best talent across the EU, to tackle skill shortages, and to give young people the opportunity to study and develop their knowledge. He added that there are serious challenges facing the EU in coming years over the subject of migration and asylum. A greater degree of solidarity between Member States needs to be developed, and the EU must ensure that migrants in need of protection have proper access to asylum procedures, as well as putting an end to the labour exploitation of irregular migrants.

On the subject of data protection, he said that the revelations about mass electronic surveillance programmes had revealed a failure of democratic accountability and oversight, and undermined EU citizens' trust in the protection of their fundamental rights. At the same time, the private sector also needs to commit to respecting fundamental rights protection when dealing with personal data.

Finally, the Director spoke about the subject of mutual trust between Member States and the rule of law. Recent events around the EU have made it necessary to discuss the best response to the violation of the EU’s core values by some Member States.

In closing, he suggested the EU should consider developing an internal fundamental rights strategy to mirror the human rights framework and guidelines existing for the EU’s external policies. “Fundamental rights are not just for the good times,” he said. “It is in times of crisis that their robustness is tested.”