Call to change the mental health view of LGBTI people 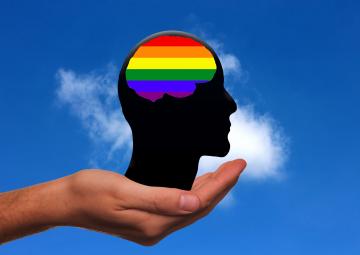 Some people consider being lesbian, gay, bisexual, transgender or intersex (LGBTI) as an illness or a disease. Such wrong and outdated views continues to permeate throughout society leading to discrimination and social stigma. This year’s International day against homophobia, transphobia and biphobia, on 17 May, uses the theme mental health and well-being to draw attention to the need to change the mindset of those, including healthcare professionals who still harbour such views.

FRA evidence has shown how in some Member States, doctors still view homosexuality as a disease and transsexuality as a mental disorder. Such views in society, and among professional groups and policy makers, hampers efforts to counter the discrimination and prejudices that many LGBTI people experience in their daily lives, as FRA's EU LGBT survey also revealed. This points to the need for more positive EU and national awareness-raising campaigns, such as in the EU’s list of actions to improve respect for LGBTI people.

Healthcare in particular is an area that needs addressing. This is an area FRA sought to explore further when it convened a workshop of healthcare experts earlier this year. Representatives of associations of health practitioners, international organisations (European Commission, WHO, UN Development Programme), national health policy makers as well as academia and civil society organisations discussed the particular barriers LGBTI people face when it comes to healthcare. For example:

These examples illustrate that such recognition still needs to trickle down into the laws, policies and views in many countries. Without this, many LGBTI people will continue to face stigma and discrimination, excluded from society which in turn affects their well-being and mental health. High rates of suicide among LGBTI groups are not uncommon, especially among the young.

This calls for a change in how LGBTI people are viewed by society, by policy makers and by professional groups. Only then will LGBTI people be free to be themselves and will their well-being be adequately ensured. To support efforts to assist this, FRA has made the raw data from its EU LGBT survey publicly available for others to use and analyse.