FRA’s Director joins leaders in the fight against antisemitism 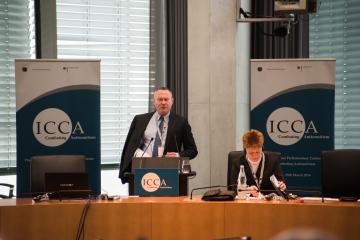 © 2016 PCAA Foundation
On March 14, FRA Director Michael O’Flaherty addressed the International Parliamentary Conference on Combating Antisemitism at the Bundestag in Berlin underlining the effect that such crimes have on individuals and communities.

“Fear drains people’s strength, preventing them from living their lives openly, as each of us has the right to do. As with other forms of hate crime – and we should all be clear that antisemitic attacks are hate crimes – an antisemitic attack does not only affect one individual victim. It does lasting damage to entire communities. If a person is targeted just because they are Jewish, the entire community becomes afraid that they might become the next target.”

The three-day conference was organised by the Inter-parliamentary Coalition for Combatting Antisemitism (ICCA) and brought together world, EU and national leaders and policy makers, as well as academics dealing with the issue of antisemitism.

During the Director’s address, he commented on the lack of systematic data collection on anti-Semitic incidents by many EU Member States. This allied with the significant unwillingness of victims to come forward, means that the scale and nature of anti-Semitic incidents within Europe is greatly underrepresented. In turn, he said, this makes it hard for policy makers to develop targeted measures to tackle the issue.

He acknowledged the clear advances that have been made. These include EU non-discrimination laws that protect citizens from hate crime and speech motivated by religious bias. At Member State level, he cited recent examples of good practice in the Czech Republic and France.

Despite these examples of progress, he expressed the need for attention in three key areas: raising awareness of fundamental rights among the general public and the Jewish community; strengthening educational initiatives that promote tolerance and respect; and the continued relaying of the message that we all accept our duty to combat antisemitism.

He closed by reminding participants that “all attacks on Jews are attacks on the fabric of our shared society…the struggle against antisemitism is our common struggle.”

FRA continues to contribute to the fight against antisemitism. The continued prevalence of anti-Semitic and other bias-related crimes within the EU means that the Working party on improving reporting and recording of hate crime in the EU, established by FRA last year, is of particular importance. The working party will publish a compendium of practices in April that will both help victims to report incidents of hate crime and law enforcement agencies to record them properly. FRA has also decided that it will repeat its survey of Jewish communities in the EU, asking them about their experiences of anti-Semitic and hate crime.