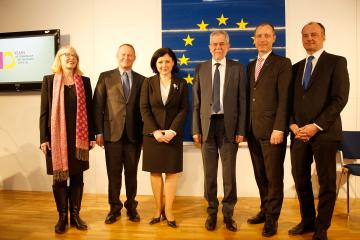 While it is important to mark the 10 year anniversary of the EU’s Fundamental Rights Agency, there are real and growing threats to the achievements that have been made over the years. This was the prevailing mood among high-level speakers, such as Austrian President Alexander Van der Bellen and EU Justice Commissioner Věra Jourová, during discussions at the anniversary event in Vienna on 28 February. They called for stronger voices and action building the case for rights-based approaches in everything we do.

FRA’s Director, Michael O’Flaherty, spoke of the challenging environment confronting human rights. There are many people who are often exposed, vulnerable or at risk and need fundamental rights protection. Patterns of abuse continue such as the rise of hate speech. Then there is the rejection of human rights, and the loss of goodwill and commitment for rights among the general public.

Taken together this is opening a window of opportunity for nationalistic politicians to “start chanting the glories of a past that never was and the promises of a triumphant future that will never be,” as Commissioner Jourová put it. “We must hold the politicians to account when they try to pretend the past discrimination, hatred and tragedies did not happen. They may suffer from chronic amnesia, we must not make the same mistake,” she warned.

The testing times we face was also echoed by President Van der Bellen. He said the situation seems a lot worse for rights than it was 10 years ago: “It seems that these are not the times for human rights. A day does not go by without news reports of human rights violations in countries across all regions of the world.” He argued that human rights are often seen as abstract when in fact they are very concrete and real: “They are what ordinary people all over the world in their daily life are striving for: to live a decent life free from fear and want.”

This thread was also picked up by Franco Frattini, the European Commission Vice President responsible for justice, freedom and security at the time FRA was created. “Many fundamental rights are a pillar for European identity.” “If Europe forgets promotion and protection rights Europe becomes an entity without a heart,” he continued. However, he believed there is a growing realisation that we badly need greater efforts and more courageous political leadership at EU, but particularly at the national level to promote and protect rights.

In response, we need to ensure there is human rights systems are not rejected. “There is no alternative; no plan B,” said Michael O’Flaherty. He also spoke of the need to be much smarter in promoting the business case for human rights s-, to convince leaders and society that the human rights way is the right way to go, as ultimately it will lead to better outcomes. This is already being picked up by many businesses who recognise the value of diversity in their workforce for example, as Beate Winkler, former Director of FRA’s predecessor, the European Monitoring Centre on Racism and Xenophobia also pointed out.

There is also a need to reconnect with the public better so they understand that rights are also about them, their families and their neighbours. Human rights are for everyone and not only for minorities. Tackling serious inequalities that lie at the root of many right violations also needs addressing. The example of high levels of poverty among children and Roma in many Member States was given. Here socio-economic rights require greater focus and the EU’s move towards a European Pillar of Social Rights is a welcome step forward for many speakers.

The FRA Director also spoke of the importance of being local where rights matter. Rights need to be brought to the villages and local communities; mayors have to be motivated to make a difference and bring about change on the ground for everyday people.

Looking back, Michael O’Flaherty spoke of the many achievements the Agency has made since it opened its doors. It has brought badly needed data to feed the laws that help shape our lives. Its work has also given its number one client, right holders, people, a seat at the table so they can voice their experiences.

Many speakers underlined the many achievements Europe can all be proud of. Frauke Seidensticker, FRA’s Management Board Chairperson, said: “The EU has developed a formidable array of structures and practices to protect fundamental rights.” These include the EU’s Charter of Fundamental Rights, a Commission First Vice President specifically in charge of fundamental rights, accredited national human rights institutions, equality bodies, fundamental rights compliance checks for all laws and policies, and the creation of FRA. The mainstreaming of human rights as never before was also cited as a considerable achievement by former FRA Director, Morten Kjaerum, Director of the Raoul Wallenberg Institute of Human Rights and Humanitarian Law.

There was also widespread recognition of the important role the Agency has played and should continue to play. Ulrike Lunacek, European Parliament Vice President, said it was a “unique provider of comparative landmark studies.” She also spoke of the parliament’s efforts to strengthen FRA’s mandate. Commissioner Jourová said: “FRA's work alerts and guides our political action: for example the 2014 survey on violence against women opened Europe´s eyes to the extent of the problem.”

Looking ahead, FRA’s Director said the Agency will continue to do what it does well and deliver the robust evidence-based advice that has become the hallmark of its first 10 years. However, he also said the Agency will become more agile. For this it needs to be relevant, act in real-time and have a tangible impact on the ground. As a result in 2017, while continuing to work on its priority areas, it will also directly support civil society to see how best to address the problem of shrinking space for civil society. It will also seek to strengthen national human rights institutions and equality bodies, explore how best to better communicate human rights, and call out abuses where the Agency sees them and act accordingly. First and foremost it will remain the body giving a face and a voice to vulnerable people at risk.

Others also underlined the importance of FRA for a right-based future. International law professor, Jan Wouters, Director of the Leuven Centre for Global Governance Studies said: “FRA should remain central to EU human rights efforts in the decades to come.” President Van der Bellen is “convinced that over the next 10 years the work of the Agency will be even more indispensable”.

In summing up, Frauke Seidensticker was inspired by all the remarks made throughout the day. It showed “we have a strong basis for human rights in the EU... We need to speak more loudly about human rights and its successes.”