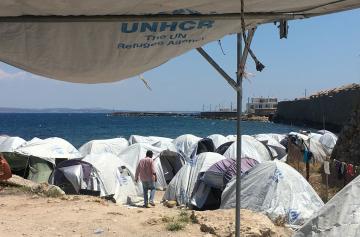 The FRA Director Michael O'Flaherty visited Greece from 13-15 June to discuss the situation in the migration hotspots.

The visit was an opportunity to take stock of the Agency’s work more than a year after FRA began regular expert missions to Greece to provide operational fundamental rights support directly to EU actors involved in the operation of the hotspots. It was also an opportunity to discuss ongoing challenges with the Minister of Migration Policy, Ioannis Mouzalas, in Athens. Building on the cooperation so far, the Agency and the Ministry extended for another six months the Memorandum of Understanding (MoU) establishing a working arrangement for cooperation. One example of past cooperation under the MoU is a workshop held by the Agency in cooperation with the Greek Reception and Identification Service (RIS) on 29 May to discuss guidance on preventing and responding to self-harm in the migration hotspots. This guidance was developed for field workers with the aim of informing about self-harm risk factors and technics to prevent and manage self-harm while ensuring respect for human dignity and fundamental rights. The workshop responded to a need identified by RIS staff on the Greek islands during previous training sessions co-organised by FRA earlier this year. Previously, the Agency had also organised a workshop on guardianship for unaccompanied children and a training of forced return monitors.

The previous day, the Director had visited the island of Chios, which lies only a few nautical miles from Turkey and has been top for arrivals since February 2017. There the Director had the opportunity to look at fundamental rights issues connected to the operation of the hotspots. He also had a side meeting with protection and legal actors on the island, including the UNHCR. Back in Athens, the Director also visited the pre-removal detention facility in Amaygdaleza, which is also used for protective custody of children, and met Greek NGOs working on asylum and migration as well as with the Greek Ombudsman.