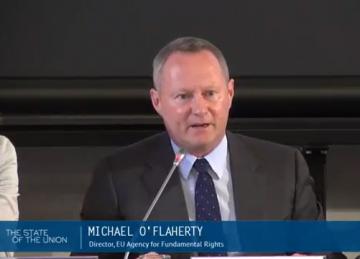 On 4 May, FRA Director Michael O’Flaherty spoke at the European University Institute’s State of the Union conference in San Domenico di Fiesole, Italy, an annual event that reflects on the EU and its future and whose theme this year was ‘Building a People’s Europe’.

Speaking on a panel entitled ‘Nothing to hide: privacy and surveillance in Europe’, Mr O’Flaherty pointed out that security and the strengthening of security services has become a preoccupation throughout the EU. While protecting the safety of its people is a vital task of any state, he reminded participants of the high human rights standards in Europe and the key importance of the principles of legality, necessity, proportionality and non-discrimination when limiting rights in the interests of security.

“If we don’t care about losing our rights, we have a serious problem,” he said. “If we carelessly let go of the human rights standards we’ve embedded in our societies, we run the risk of unravelling the peace we gained after the Second World War.”

FRA’s Director went on to talk about the Agency’s projects on surveillance and on the fundamental rights implications of storing and using biometric data in the field of migration and asylum. FRA’s surveillance project was carried out at the request of the European Parliament, and researched the protection of fundamental rights in the context of surveillance by national intelligence authorities. Following a mapping of the legal framework in EU Member States in 2015, FRA will publish its final report in October this year.

Going on to speak of the integral role that human rights play in national security policies, Mr O’Flaherty said: “We must counter a perception that national security and human rights are a zero sum game in which one excludes the other. Rather, providing for people's security must go hand in hand with respect for their rights.”

There were numerous questions from the floor to all the panellists, who also included Francesca Galli, Associate researcher in the Faculty of Law at the University of Maastricht, Bruno Gencarelli, Head of International Data Flows and Protection Unit at the European Commission’s Directorate-General Justice, and Fernanda Nicola, Professor of Law at the Washington College of Law, American University.