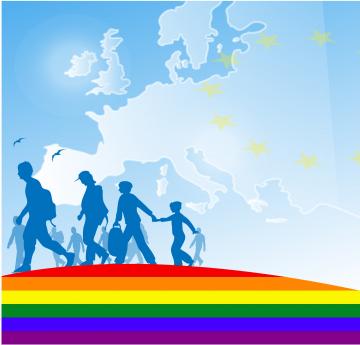 Significant numbers of lesbian, gay, bisexual, transgender, and intersex (LGBTI) people have come to Europe fleeing persecution in their home countries but asylum barriers hinder them from receiving the protection they are entitled to. These are some of the findings from the latest summary report of FRA on migration-related fundamental rights concerns in selected EU Member States. It examines some of the difficulties LGBTI asylum seekers face in order to draw attention to gaps in their protection.

Nearly 80 countries worldwide still criminalise sexual orientation; in five the sentence can be death. Although such persecution is a ground for claiming asylum under EU law, official figures are not collected, making it difficult to assess numbers of LGBTI applicants. However, civil society estimates of those seeking help, point to significant numbers. For example, in The Netherlands, one organisation alone was contacted by up to 3000 applicants.

While the EU offers sanctuary to LGBTI people who may be tormented in their home countries, many Member States are failing to adequately support LGBTI asylum seekers, as this latest report shows. Some of the report’s main findings include:

The report also identifies promising practices that have been developed by, for example, Europe’s Asylum Support Office that other Member States could use to support LGBTI asylum seekers.

FRA has published overviews since September 2015. The next focus will be on education.