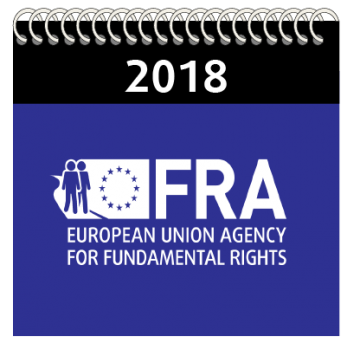 This year the Agency will see the return of its landmark Fundamental Rights Forum. Following the success of the 2016 event, it will again bring together a diverse group of people from many walks of life but this time will explore what belonging means to different groups. In doing so, the Forum will seek to find ways how best to instil a culture of fundamental rights across the EU by demonstrating that human rights are for everyone and must be respected by everyone.

In January the Agency will host a seminar of leading European human rights communicators. It builds on its 2017 expert meeting that brought together an unusually wide range of disciplines and professions to share experiences on how to better communicate fundamental rights and freedoms in a world that is growing increasingly intolerant. The seminar aims to share hands-on best practices in communicating rights that will form the basis of a practical communicating human rights checklist for others to share and use. Such discussions will provide a useful backdrop to the Forum in September.

It will also continue to mine the rich #FactNotFake data collected from its second minorities and migrants discrimination and integration survey. Drawing on findings from the largest EU-wide survey of experiences of and attitudes towards some of Europe’s most marginalised communities, including Roma and various immigrant groups, it will release a series of targeted thematic reports. They will look at what it is like being black in the EU, as well as focus on how women from minority or immigrant groups experience life in the EU. Such nuanced insights should provide policy makers with the data they need to create more effective targeted support. Roma will be the subject of another thematic report looking specifically at the transition from education to employment which is key driver to escaping the vicious cycle of poverty many Roma are trapped in.

Staying with Roma, this year will also see other related Roma findings come to light such as its report that assesses how well Roma integration measures have been in practice (April). Then in November the report from the Agency’s local engagement for Roma inclusion work that sought to find ways to empower Roma in getting directly involved in decisions that affect them.

Migration will again be a strong focus of the Agency’s work in 2018. Throughout the year, it will continue its series of periodic reports on migration-related fundamental rights concerns. It will also continue to provide frontline support to migration hotspots in Italy and Greece. In addition, in March, it will publish a major report that looked at the fundamental rights implications of using biometrics, such as fingerprinting, in border management.

As the reform of the EU’s data protection rules will take effect from May, the Agency will be there with practical hands-on guidance. Its popular handbook on data protection law will be re-released with updated simple explanations and examples from European case law. It will guide legal professionals unfamiliar with data protection rules of these rules and how they are applied in practice. Further practical support to practitioners such as law enforcement officials will be released later in the year in the shape of a guide on preventing unlawful profiling. Building on FRA’s 2010 guide that included data on ethnic minority, immigrant and Roma groups’ experiences of police stops, this new guide will provide a general update. It will take into account legal and technological developments. The scope will also be expanded to include border management.

At the same time the Agency will be busy carrying out on the ground repeat surveys on antisemitism as well as LGBTI discrimination and hate crime. It will also be surveying the general populationacross the EU to get a better understanding of their experiences and opinions on fundamental rights.

All told, this is just a snapshot of some of the 2018 highlights. A fuller picture can be seen in the 2018 calendar.