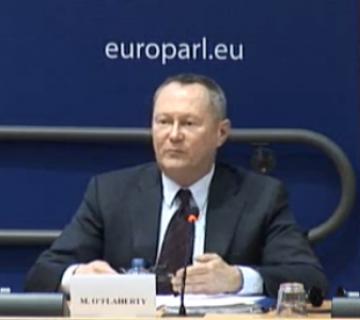 We live in strange times for fundamental and human rights with rights violations continuing to be unacceptable; but now also increasingly the systems guaranteeing rights are being rejected and considerable parts of the population are losing confidence in rights, feeling they belong to others not them. These were the opening words of the FRA Director when outlining the Agency’s 2017 priorities of migration, discrimination, security and rights promotion during the European Parliament’s Committee on Civil Liberties, Justice and Home Affairs (LIBE) meeting in Brussels on 9 February. However, he made assurances that the Agency is acutely sensitive of this environment and is seeking to engage with it at every turn.

The Director prefaced his address by underlining the guiding principles for the Agency’s work. These included relevance and timeliness, providing robust scientific evidence as and when it is needed, grounded by law. It also endeavours to ensure its work will have an impact so that real people experience real improvement on the ground.

He then turned to the Agency’s ongoing focus on the fundamental challenges resulting from the current refugee and migrant situation. Here the Agency’s will continue its work supporting actors in the migration hotspots and its monthly multi-country reporting of rights concerns such as the health of migrants. It will continue to deliver legal in-depth legal analyses in the form of Opinions as requested by parliament as it did in 2016.  He also highlighted two upcoming reports. One will look at the use of biometrics in border management and the other, due out in March, will cover the integration of migrants in society.

Another priority will be tackling combating discrimination throughout the EU. 2017 will be a landmark year with the release of findings from the Agency’s second EU minorities’ survey which covers the experiences of various minority groups within European society. The first Roma results already emerged last year. He reassured participants the Agency will continue to work on the 'troubling and unsatisfactory' situation of Roma. The experience of what it is like being Muslim in Europe will follow and then the main results in December. FRA will also start work on its second antisemitism survey.

The Director also spoke about the importance of security and safeguarding fundamental rights through ensuring all measures adhere to the principles of legality, necessity and proportionality. Here he flagged the report on fundamental rights and mass surveillance by intelligence services. Directly answering a request from parliament, it will contain findings from a socio-legal analysis of existing laws and how they translate into practice. It is also looking at impact on rights of the interoperability of large-scale IT systems and the use of biometrics as already mentioned.

The Agency will continue to use its full range of tools to deepening the culture of respect for rights across our society. Here he singled out the Agency’s efforts to strengthen and support civil society, national human rights institutions and equality bodies. He also spoke about promoting and communicating about rights and the EU’s Fundamental Rights Charter. It will also work on building a European Fundamental Rights Information System.

He closed by noting 2017 is the Agency's 10-year anniversary. For FRA it is not a time for celebration but a time to acknowledge and mark the occasion: "We cannot celebrate because the issues remain too daunting, the patterns of abuse remain too great, and the challenges remain impressive and considerable". However, going forward for the next 10 years, he said the Agency remains strong in determination with a clear sense of direction and will continue to support parliament, and the LIBE committee, with the solid fundamental rights expertise it needs to "build the Europe of values in which we all believe."