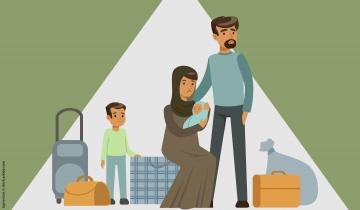 The situation at the EU’s external and internal borders, as officials process migrants entering or passing through the EU, remains tense in some places, finds the Agency’s latest report on migration-related fundamental rights issues. It also highlights some of the hardships many migrants, particularly women and children, continue to experience.

Looking at the situation across 14 EU Member States, the report reveals how migrants are being sent back without the chance to lodge claims for international protection in France, Croatia, Spain, Hungary, Poland and Greece.

Austria, Denmark, France, Germany and Sweden prolonged internal border controls in the Schengen area for another six months. Between Italy and France, tensions remained high with reports of inappropriate practices being carried out by French border police.

For those already in the EU, recurring problems remain.

Overcrowding continues to be an issue. In Greece, the Reception and Identification Centres on the Aegean islands have twice as many people as places. In Evros, at the Turkish land border, hundreds of people, including many children, are placed in inadequate local police detention facilities. In Spain, NGOs said the reception system is about to collapse, particularly in Madrid, Barcelona and Bilbao, with many people living in the streets or in homeless shelters.

Women and children continue to suffer. For example, a study revealed that 95% of women arriving in Italy had suffered sexual violence during their journey, 17% of whom in more than one country. In Hungary, human trafficking seems to be rising. In addition, its authorities’ ability to detect potential trafficking victims among asylum applicants in the Hungarian transit zones appears to have worsened over the past three years, according to a Council of Europe report; children between 14-18 years of age in closed facilities are particularly vulnerable.

Support for unaccompanied children again is often lacking. This is particularly an issue in Bulgaria, Greece, Italy, and Spain where numbers are rising, even though overall the number of children arriving in those countries has fallen by 70% since 2016. There were instances of children living in inhumane conditions with no access to drinkable water and sanitary facilities in conditions of extreme neglect in Italy and in an overcrowded centre with no hot water or on the streets in Spain.