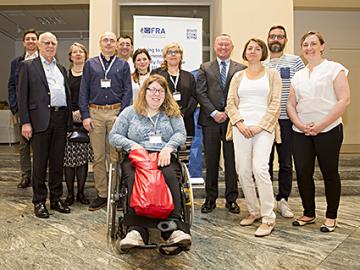 FRA Director Michael O’Flaherty opened the meeting of the FRP Advisory Panel on 14 June at FRA, providing an overview of the Agency’s recent and upcoming work. He highlighted the recently adopted FRA strategy, emphasising its increased focus on providing assistance, expertise and capacity building, particularly to EU Member State governments. After a brief overview of FRA’s ongoing projects and latest publications, he invited the Panel to use the two-day meeting to give input on how to further develop the FRP, both in view of increasing civil society consultation on and contributions to FRA projects, and in regard to the Platform’s potential role as a ‘protective space’ in a context of increasing challenges to civil society organisations across the EU.

The Director referred to the Agency’s January 2018 report on ‘Challenges facing civil society organisations working on human rights in the EU’: “These are challenging times for civil society across the EU, with knock-on effects to the health of our democratic societies. In the past years, there have been increasing challenges across the board:  access to funding, shifting legal landscapes,  heightened concerns for activists’ physical and digital safety, and many question marks around effective and meaningful access to the decision making process.

In a number of EU Member States we have seen security concerns used as a pretext to curtail freedom of assembly and of association; anti-money laundering regulations misinterpreted and turned against CSOs; and - in some countries - noticeable and inacceptable efforts to criminalise humanitarian action, including for refugee support. More worrying still, we have seen civil society organisations leaving certain EU countries. Such developments used to be unthinkable inside the EU.

While the European Commission included support to civil society prominently in the multiannual financial framework and a new Justice, Rights and Values Fund, adopted on 30 May this year, there is further need for a renewed support to democracy and civil society. We all recognise the legitimate concerns of governments, their duty to regulate, and their rights to decide which organisations to fund and the manner in which they do so. But it is crucial that this be done in a fair and transparent manner, in full respect of national, EU and international law. FRA stands ready to support all EU governments in this regard, building on the many promising practices we have seen on the ground.”

The Fundamental Rights Platform (FRP) is FRA’s channel for cooperation and information exchange with civil society organisations active in the field of fundamental rights. Its Advisory Panel convened in Vienna on 14-15 June to discuss the Platform’s future development, to address questions regarding challenges to civil society space in the EU, and to provide input for the upcoming Fundamental Rights Forum 2018.

The FRA report on ‘Challenges facing civil society organisations working on human rights in the EU’ has already been presented in Poland (14 March), Bulgaria (30 May), and the Agency will be discussing its findings with civil society and government in Romania (19 June) and Hungary (5 July).  Presentations in Ireland, Portugal and Slovakia are foreseen for the autumn. The report has also been presented to the Council of the European Union’s FREMP and COHOM Working Parties (December 2017), the Council of Europe (January), the OSCE-ODIHR (March and April), and the European Parliament’s LIBE Committee (April). FRA will co-organise a side event at the UN Human Rights Council in Geneva on civil society space on 25 June.