FRA joins UN Commission on the Status of Women discussions 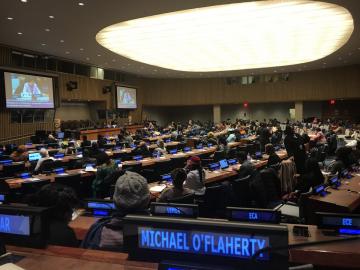 The FRA Director underlined its strong commitment to promoting the human rights of women and helping to deliver on the 1995 Beijing commitments to advance women’s rights.

He was speaking in New York on 13 March at the UN Commission on the Status of Women where he was part of a high-level panel on accelerating the implementation of the Beijing Declaration and Platform for Action to achieve concrete results by 2020.

He explained how the Agency works in the context of the EU, noting that the EU still has a long way to go before it can claim to have implemented the Beijing commitments. The Agency supports these efforts in various ways.

For example, its ground-breaking survey on the incidence of violence against women in the EU triggered important policy responses and contributed to the EU ultimately signing the Istanbul Convention. This year the Agency will also publish survey results on the experiences of harassment and discrimination on the part of Roma and migrant women in Europe.

The Director also talked about working in a better spirit of global cooperation. For example, the Agency is open to sharing its methodologies on surveying the most vulnerable women of our societies, with other regions so such surveys can be replicated. It also would like to learn from other regions globally in order to improve the EU’s own responses. This will be instrumental in helping to deliver on the Beijing commitments to deliver on the human rights dimensions of the Sustainable Development Goals. He acknowledged that in Europe we have much to learn. The Agency as part of this will be reaching out across the globe in order to identify good practices which can then be reflected in its advice to EU Member States.