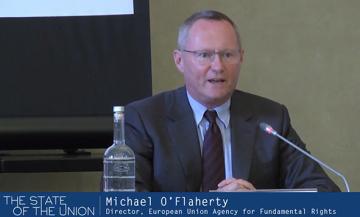 Cities can play a vital role in meeting today’s migration challenges, said FRA’s Director at this year’s State of the Union conference in Florence on 10 May.

Drawing on the Agency’s work across Member States, he underlined important success factors that repeatedly stand out. For example, integration strategies work best when there is local empowerment and delegated decision making at the local level in the towns and cities rather than far away in capital cities. Linked to this, better outcomes invariably happen when you involve local authorities, migrants and the local community in conversations that affect them.

He also recognised how cities are incubators of promising practices. They can be laboratories of innovative ideas that can be transferred elsewhere. Here he cited real-life examples, such as an initiative from Rotterdam which encouraged migrants to act as volunteers in the communities and one from Athens where language training was offered to migrant parents in the schools their children were attending.

However, he also acknowledged that while promising practices exist, there are also lots of examples were conflicts arise. He warned against neglecting the wider context, the macro dimension at the global, European or national level while focusing on local solutions. Both sides of the equation are equally important, especially as many decisions may be taken at the national not local level. Here he gave the example of providing accommodation for migrants where the housing authority in some countries resides in the capital. The diverse models of governance with different levels of centralised control that exist across the EU may have a huge impact on what cities can deliver.

A human rights-based approach could help. This is because human right commitments are grounded in law. Therefore they are enforceable and Member States can be held accountable. In addition, existing legal obligations are comprehensive in terms of engaging with the situations that are proving most difficult for all of us. Here he drew attention to the European Convention on Human Rights, UN Treaties and of course, the EU’S Charter of Fundamental Rights. They provide guidance and advice across all areas of life, from housing to employment, from combatting hate speech to establishing clear procedures for asylum.

Human rights also belong to everyone, not just one group. As a result they are driver for integration as they apply to both the local community and the migrant community.

He concluded by drawing inspiration from the many networks of cities that are springing up. The network of human rights cities, the European coalition of cities against racism and many others, all have the potential to assist us. They can show us how cities, towns and villages can all help meet Europe’s migration challenges.