Migrant pushbacks a growing concern in some Member States 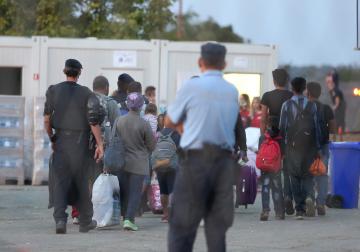 Migrants crossing the Serbian border into Opatovac, Croatia
© European Union , 2015 / Source: EC - Audiovisual Service / Photo: Oliver Bunic
Migrants at border crossings face being turned back in a number of Member States without the chance to exercise their right to asylum, finds the Agency’s latest report on migration-related fundamental rights issues. Pushbacks and cases of people being returned to where they risk persecution are just some of the challenges facing migrants when trying to enter or travel through the EU.

Looking at the situation across 14 EU Member States, the report reveals how in Croatia, France and Spain migrants continue to be sent back without the chance to lodge claims for international protection. In Greece, there are rising numbers of families, pregnant women and torture victims at the border between Greece and Turkey who risk being persecuted as they are forcibly ejected from the EU.

For those already in the EU, recurring problems remain.

In Spain for example, the reception conditions for the growing number of newly-arrived migrants remained critical and the situation appears to be getting worse. According to the Spanish Ombudsperson, mothers with babies and unaccompanied children were held in prison-like cells, and men were sleeping on the floor with no heating. There were also delays in processing asylum claims.

In Greece, migration hotspots reception centres on the islands of Lesvos, Samos and Chios remain overcrowded. This is despite falling number of arrivals.

Growing intolerance towards migrants is another worry. In Hungary, for example, the government’s ever stronger anti-migrant stance, has led to a hardening of attitudes among the general public towards migrants. As a result xenophobia is on the rise, according to NGOs in the country. In Germany, attacks against refugees are rising again. Overall, in 2017 there were around 2,220 attacks against refugees and their accommodation; at least 300 people were injured. There have also been attacks reported in Italy and Greece.