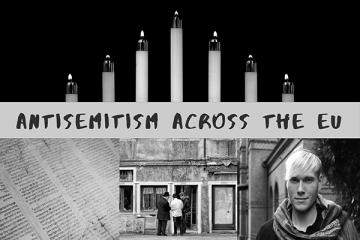 The persistent problem of limited data hinders effective responses to tackle Europe’s longstanding antisemitism issues, finds the EU Agency for Fundamental Rights’ latest annual overview of antisemitism data from across the EU. Without such data, government and civil society efforts to combat antisemitism will remain general and untargeted.

The Antisemitism: Overview of data available in the European Union 2007–2017 report is released on the day that remembers the wave of violent anti-Jewish events of Kristallnacht on 9 November 1938. As in previous years, it underlines the problems of limited data on how people experience antisemitism.

It reveals how official data on reported antisemitic incidents were missing in eight EU Member States for 2017.

In addition, the high-level of under-reporting by victims and different national approaches to data collection make it difficult for policy makers to understand the extent, nature and characteristics of antisemitism in their countries and across the EU.

However, antisemitism remains a serious concern which requires action, based on the official and unofficial data that is available.

National data collection on hate crime, including antisemitism also needs improving. Here FRA’s compendium of practices for combating hate crime which has examples of how some Member States are recording hate crime could help.

On 10 December, the Agency will publish findings from its second survey of on the perceptions and experiences of antisemitism among Jews in the EU

Education is essential to prevent intolerant attitudes. It can help that foster tolerance, spread universal values and encourage critical thinking. It can help children and young people bring a change of mindsets to their families and communities, and ultimately society.

The updated report compiles available data on antisemitic incidents collected by international, governmental and non-governmental sources, from 1 January 2007 until 31 December 2017.

By the time this report was compiled, no official data on reported antisemitic incidents in 2017 were available for Finland, Hungary, Ireland, Malta, Portugal, Spain, Sweden and the UK.