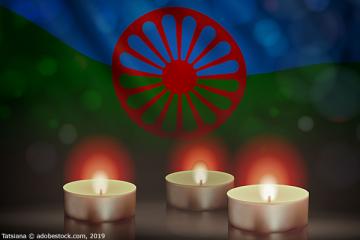 The Nazis persecuted, detained and executed hundreds of thousands of Roma. But the Roma genocide during the Holocaust was not formally recognised until the 1980s. Roma Holocaust Memorial Day on 2 August is a time to remember their suffering and to call for an end to the longstanding antigypsyism that Roma communities still endure today.

The Nazis murdered an estimated 500,000 Roma during the Holocaust. No Roma man, woman or child survived the Auschwitz-Birkenau concentration camp. And of the 25,000 sent to camps in Transnistria in the Soviet Union, only 11,000 survived.

This largely forgotten side of the Holocaust has only been marked since 2009. Ten years on, Roma Holocaust Memorial Day, is a chance to recognise and commemorate the suffering of thousands of Roma and learn from the past to build a better future for today’s Roma.

Even though Roma are Europe’s largest ethnic minority, antigypsyism, hate crime, as well as hate-motivated harassment and discrimination still plague many Roma across the EU.

A FRA survey of Roma across nine EU Member States indicates that 36% were victims of hate-motivated harassment and 41% of discrimination in the five years before the survey.

Clearly, Member States need to do more to counter antigypsyism, and improve the life chances and living standards for Roma.

The past should be a constant reminder of the dangers of allowing hatred to go unpunished.

Roma Holocaust Memorial Day is a day to signal that Europe does not tolerate the persecution and discrimination of Roma. It should galvanise Europe’s ongoing commitment to promoting and protecting Roma communities across the EU to fully integrate them in society.