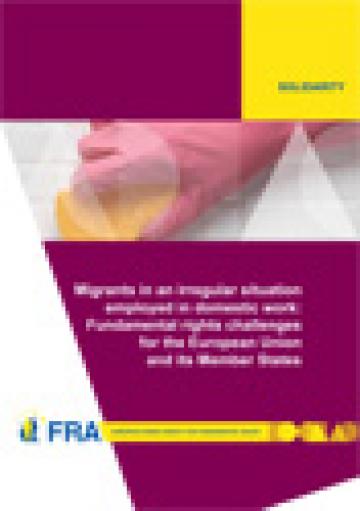 05/07/2011
Today the European Union Agency for Fundamental Rights (FRA) is presenting its report on the fundamental rights of irregular migrants who are employed as domestic workers in the EU. Most irregular migrants in domestic work are women. The report shows that their irregular immigration status, coupled with challenges in regulating domestic work more generally, makes this group very vulnerable to exploitation, including cases of physical abuse. Typical forms of exploitation include low pay, often having to work excessive working hours, and usually not being able to obtain compensation for work-related accidents.

FRA Director Morten Kjaerum: "From a fundamental rights perspective, it is key to improve the situation of all domestic workers in the EU - whether they reside regularly or irregularly in an EU Member State. This is reinforced by the ILO Convention Concerning Decent Work for Domestic Workers, which was adopted in June 2011, and which applies to all domestic workers."

He continued: "It is up to the governments to decide what labour force to bring into a country from abroad. But once a person is in the country and employed in spite of being in an irregular situation, core labour law and human rights standards must apply. In practice, the fear of deportation or dismissal deters victims of abuse or exploitation from going to court. Because possible deportation is the price of access to justice, often those who mistreat irregular domestic workers go unpunished."

The report is based on in-depth interviews with domestic workers, civil society organisations and trade unions from across ten EU Member States and covers their enjoyment of fundamental rights in five areas: working conditions, dismissal, freedom of association, redress mechanisms and family life.

Find the full report here: Migrants in an irregular situation employed in domestic work: Fundamental rights challenges for the European Union and its Member States

For more information about the topic, also visit the following links: