FRA Director presents the results of the EU LGBT survey in The Hague on International Day against Homophobia and Transphobia, 2013.

Ladies, gentlemen and others,

Let me start with a quote: “It is a tragedy, I feel, that people of a different sexual type are caught in a world which shows so little understanding for homosexuals and is so crassly indifferent to the various gradations and variations of gender and their great significance in life.”

Emma Goldman, the Russian-born activist wrote these words nearly 100 years ago. This could have been written today. It remains a reality today that respect for human dignity is still not a reality for everyone across the EU.

As the report we present today testifies, many lesbian, gay, bisexual and transgender people are simply not able to be themselves at work, at school or in public, and too many not even at home. Many hide their identity and live in isolation. Far too many have experienced violence, or live in fear of being attacked or harassed. Many others experience discrimination and even violence.

How do we know?

We have just finalised a major survey of the LGBT population in Europe. We have more than 93,000 repsondents from all 27 EU Member States and Croatia. This is the largest ever survey to ask LGBT people about their experiences of violence and discrimination. The survey was developed in response to calls from the European Parliament and Commission Vice President Reding in 2010 to look into the discrimination of LGBT people.

We used the tried and tested methodologies that the Agency has developed, and that we have successfully applied in the past with other hard-to-reach discriminated groups. We brought our own in-house experts together with Gallup, one of the market leaders in large-scale surveys. In addition, we also worked in close cooperation with civil society organisations including ILGA-Europe and Transgender Europe provided advice on how to best approach LGBT people. I would like here to thank them for their excellent cooperation.

After serious consideration, we decided to carry out the survey online and anonymously. It was the best, and only, way to capture as many responses as possible of those who do not feel comfortable to come out and share their experiences. We do not claim that the results are fully representative, but the views of almost 100,000 people are certainly very relevant, politically and in terms of finding specific, targeted solutions. Their answers have allowed us to perform robust statistical analysis on the perceptions and views of a very large and diverse number of LGBT people across the the 27 Mamber States and Croatia.

And the results are sobering. Significantly, LGBT people reported problems in all EU Member States, from east to west, from north to south.

So, what were the key findings? What do we know now?

I will focus on four main areas:

First, let’s go back to school. We all remember our school time. Many people say that school marks the best years of your life. Our survey results suggest otherwise. At least 60% had personally been bullied throughout their time at school. And over 80% of respondents, in every EU Member State, said they had seen their LGBT peers bullied at school. But what is specialabout that? To those who say that bullying is part of ‘regular’ school life, let me mention some telling suicide statistics. A Danish study found that LGBT people were twice as likely as the average population to have considered or attempted suicide. Of these, more than 60% were under 20 years old. So bullying in school has a real impact and needs to be addressed.

Clearly, Member States need to ensure that LGBT students, like all other students, feel safe at school. Bear in mind, it is at school where negative experiences, prejudices and exclusion often begin.

To this end, anti-bullying policies should be developed and implemented. Governments should make efforts to provide objective information on sexual orientation, gender identity and gender expression as part of the overall school curricula. And teacher training should be introduced. This includes how to tackle bullying, including against those who are or are perceived to be L, G, B or T.

Secondly, there is widespread discrimination.

Apart from education, our survey identified problems in many other walks of life. This included discrimination against LGBT people at work, in housing, healthcare, social services, and in access to goods and services. About half of all respondents said that they had personally felt discriminated against or harassed on the grounds of sexual orientation in the year before the survey. And despite the EU-wide protection against discrimination in employment, one in five of those who were employed or were looking for work in the year before the survey felt discriminated against in the workplace. For transgender respondents this rose to about one in three.

Such figures reveal the need for EU-wide and Member State action to counter the many obstacles LGBT people face in the enjoyment of their basic rights in everyday life.

That’s why Member States, and civil society, need to work together to exchange good practices, review legislation and develop policies. EU action could be the driving force to bring this about.

Our survey found that about a quarter of all respondents had been attacked or threatened with violence at home or elsewhere in the last five years. As many as 35% of transgender respondents said they had been victims of violence or threats of violence more than three times in the past year.

Just 22% of the most serious violent incidents experienced by LGBT people in the five years preceding the survey were brought to the attention of the police. Looking at it another way, this means 78% were not reported. I must add here that in many areas of our work with different groups, with different groups of victims, the same pattern emerges: Victims do not report discrimination, victims do not report violence. How can we create stronger trust between law enforcement and LGBT people and minorities across the EU? We can see that there are some countries where there is higher reporting. So we need to look at what they are doing in those countries.

There is a wall of silence, cemented by fear, mistrust and a sense that nothing will change.

All of this points to the need for LGBT victims to have recognition and protection EU-wide and nationally.

This could be done by including homophobic and transphobic hatred as possible motives in national legislation on bias motivated crime. A number of EU Member States have already done this. Others could follow.

Rights awareness, and the means to report hate-motivated violence, should be promoted. Member States should tackle the high levels of underreporting by supporting equality bodies, national human rights institutions and other national complaints mechanisms to raise awareness of what LGBT people can do, who they should turn do and what support is available. Member States should also train law enforcement officials on how to respond to LGBT issues or encourage civil society organisations to report on behalf of victims.

But that is not suficcient. We also need to collect and investigate hate crime data and the motivations behind such crimes. This does not only relate to LGBT, but hate crime in general. For example: is this sort of hate crime linked to extremism?

Intelligence services are addressing this question. That is fine: they are there to protect state institutions. But we also need the police to be involved.

Respondents to a FRA survey of ethnic minorities said that only 10-15% of hate crime perpetrators were right-wingers, which means they define 80-85% of offenders as “normal citizens”. This is another reason to involve police, as they have a human rights obligation to protect everyone.

This will enable targeted policies and laws to best tackle hate crime.

Lastly, the experiences of discrimination, harassment and violence captured by the survey often take place against a backdrop of widespread fear.

One that really strikes me is that a very high percentage, 75% of gay and bisexual men do not dare to hold hands in public.

Who would not want to hold hands in public of the person you love most? But more than half of LGBT respondents across all EU Member States were scared of holding hands in public with their same-sex partner. For gay men this figure rose to almost two-thirds. From Greece to Great Britain, from Spain to Sweden, it was the same story.

When it comes to combatting this fear, politicians should lead by example. It is telling that almost half of all respondents believe that offensive language about LGBT people by politicians is widespread where they live. We know that negative public speech can fuel prejudice and fuel hatred, which is why elected officials as well as other public figures really need to be mindful of what they say.

Ladies, gentlemen and others,

A too great number of LGBT people across Europe are being barred from being themselves. Their ability to enjoy their basic human right of living with dignity, to enjoy life and express themselves freely without discrimination, is being denied.

And I can’t help asking myself: what is the issue here? What are people actually afraid of? What is preventing policy makers from acting?

I’ve already made a number of concrete suggestions on how to move forward. What is evident is that there is a clear need for political leadership and EU-wide action as a catalyst for change. Here, the Council of Europe plays a key role, and their recommendations could serve as a useful benchmark. I’m very please with the CoE’s idea to roll out our survey in other European countries outside EU. National action plans – which in some countries are already making a difference – need to be rolled out in all Member States. From the survey, we can detect an impact of the action plans. This will ensure that comprehensive and effective measures deliver respect and safeguard the rights of LGBT people on the ground.

So, let me close with the words of a young transgender Bulgarian person who answered our survey.

“I have experienced humiliation, beatings, and insults from people I know and people I do not know, but I wanted people in my surrounding to learn that I am a human like any other, and that my sexual orientation does not make me different from them! I am a human.”

Thank you very much for your attention!

Presenting the findings from the largest-ever LGBT hate crime and discrimination survey
The FRA will present the results of its survey into experiences of hate crime and discrimination by lesbian, gay, bisexual and transgender (LGBT) people on International Day against Homophobia and Transphobia on 17 May 2013 during a conference hosted by the Dutch government in The Hague. 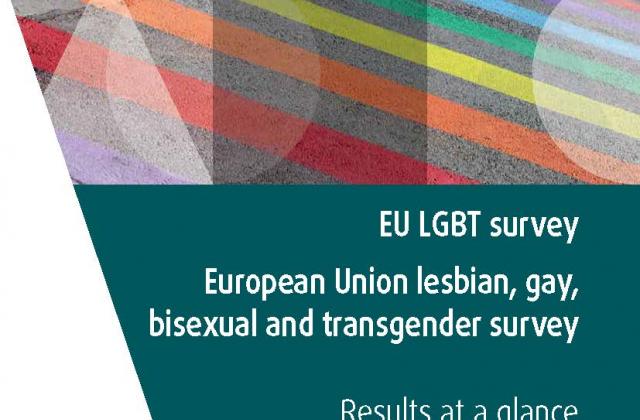 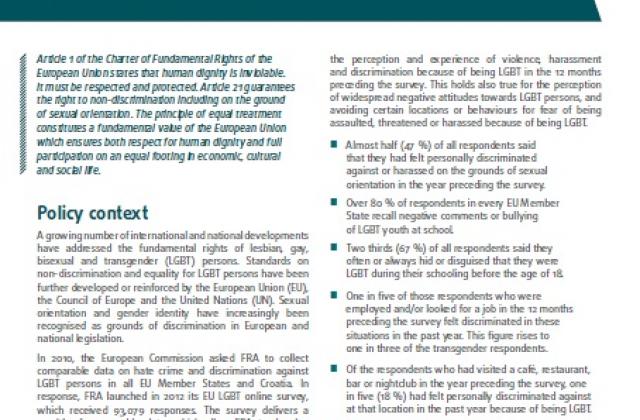