Welcome speech by FRA Director Morten Kjaerum at the 'Tackling sexual orientation and gender identity discrimination: next steps in EU and Member State policy making' event at the Council of the EU, Brussels, 28 October 2014.

Ladies and gentlemen, others,

I would like to welcome you all here to this event at the Council of the EU. I would particularly like to thank the Italian Presidency, Ambassador Sannino and the Council Secretariat for co-hosting this event. Also a warm welcome to Commissoner Reicherts, ministers and representatives from the European Parliament and Commission, not to mention the many representatives of national governments and parliaments who will active take part in the discussions. Last but not least, a warm welcome to the diversity of civil society organisations and practitioners here today who have been actively working on this issue for many years to bring about real change in the real lives of LGBTI people. Thanks for your great work.

I’ll begin by setting the scene flagging some key legal trends that we’ve observed in the EU in terms of protecting LGBTI people from discrimination and hate crime. I will then talk about the realities on the ground. I will then conclude with some ideas for next steps to get the ball rolling for our discussions throughout today.

1) So, first to the laws that form the basis of the rights that LGBTI people across the EU enjoy.

Without question, LGBTI people in the EU enjoy today considerably more freedom than they did some few years ago. Things are moving ahead. The principles of equality and non-discrimination are hard wired into the EU Treaties, and prohibiting sexual orientation discrimination is explicitly mentioned in the Charter of Fundamental Rights.

More specifically, such discrimination is prohibited across the EU in the area of employment. Plans to extend this to other areas - such as access to goods and services – under the so-called EU’s Horizontal Directive have been stalled for a long time. There is now a new window of opportunities to move forward with the Directive’s adoption since the European Commission has explicitly made this Directive one of its priorities.

However, even in the absence of this Directive, we have seen that more and more Member States have taken the initiative to extend protection to other areas than employment. Consider in 2008, 9 Member States limited sexual orientation discrimination to just employment. By 2014, this has dropped to only 3 Member States. That is a sign of progress.

When it comes to gender identity the picture is different. Gender identity is not explicitly covered in the EU Treaties nor in the Charter of Fundamental Rights. However, the European Court of Justice has ruled that sex discrimination also covers people who underwent, are undergoing or intend to undergo gender reassignment.

But problems remain for those who do not want to undergo gender reassignment; especially when it comes to getting identity documents in place that match their gender identity. Currently 15 Member States require non-reversible infertility and 9 Member States require people to be unmarried or to dissolve their marriage as a legal precondition to get the preferred gender recognised.

Let me now turn to hate crime. There is currently no explicit EU instrument protecting LGBTI people from hate crime. Here once again, Member States have stepped in: 19 now have laws making it a criminal offence to incite hatred or violence on the grounds of sexual orientation. This is almost double the number from 2008. This is a tremendous move forward.

In this context, the EU’s Victims’ Directive is undoubtedly an important step forward, as it also includes the grounds of sexual orientation, gender identity and gender expression when recognising the rights of victims. When it is transposed into national law across all Member States in a year’s time in November 2015, it will help to ensure that victims of crime receive appropriate information, support and protection, and are able to participate in criminal proceedings.

All added up, protection has been strengthened in the last 5-10 years but there is still lots to be done in that regard. And it is needed.

2) So how do these laws translate into the day-to-day lives of the LGBTI community?

Our EU LGBT survey results paint a picture of fear, isolation and discrimination common in LGBT community across Europe. Many suffer regularly from not being able to be themselves at school, at work, in public and in their private life. Many feel the need to hide their identity.

For example, some 66% of respondents in all EU Member States are scared of holding hands in public with their same-sex partner. Such a normal everyday thing to do. Over 80% said that casual jokes about LGBT in everyday life were widespread. And homophobic and transphobic discourse among politicians is still a reality in some EU Member States.

When we delve into the survey findings, as you will see from FRA’s main results report presented here today. Here we see other patterns emerge. Young LGBT people particularly suffer: 67% of all respondents hid or disguised their sexual orientation or gender identity when they were at school. Boys especially opted for complete secrecy: Around three quarters had never been open to anyone at school about being gay or bisexual. And why? Over 80% of respondents in every Member State recalled negative comments or bullying of LGBT youth at school. To those who say that bullying is part of ‘regular’ school life, let me point out that suicide statistics among LGBT youth are much higher than among youths as many studies have shown. So bullying in school has a real impact and needs to be addressed. Clearly, school being the best years of your life does not apply equally to everybody, particularly LGBTI people.

Another very worrying finding, is how few LGBT people are being open in their own families.

What does this all say about European society today? Are we stuck in a dialogue about normality from centuries ago that means little today?

Encouragingly, increasingly Member States are taking steps through their action plans and policy measures, some of which we have highlighted in our Annual Reports.

Member States can also receive assistance from the European Commission under its new Rights, Equality and Citizenship Programme. And some EU Member States have worked intensively with the Council of Europe in recent years to make very concrete changes to their legal and policy frameworks.

Local and regional authorities are also stepping up their efforts, as a forthcoming report from the Council of Europe’s Congress of Local and Regional Authorities will show. And this also ties in well with work being done by the Committee of the Regions. Such efforts should be applauded. After all, human rights violations happen at the local level. It is where we live that we meet the nurses, the police the teachers that are so important in mobilising efforts to bring about change for LGBTI people which is also why it is so good to see many of them here today. Your work is being noticed.

FRA has interviewed over 800 police officers, teachers, health practitioners and policy makers about their awareness and role in promoting the fundamental rights of LGBT people. While many of them are alert to the issue, they point to adverse social climates, widespread prejudice, lack of awareness or ignorance and in some cases direct political opposition as key barriers for legal and social change to come about.

Finally, we will look for the first time in more detail into the situation of intersex people in our comparative report of the laws across the EU that protect the rights of LGBTI people.

We have seen in our reports that where policies and action plans exist, LGBT people tend to be more satisfied with their life. They are less afraid and can be more open. This makes a difference to the lives of thousands of LGBTI people across the EU.

The narrative is changing. For some it may be too rapid. But for the LGBTI community it is far too slow. 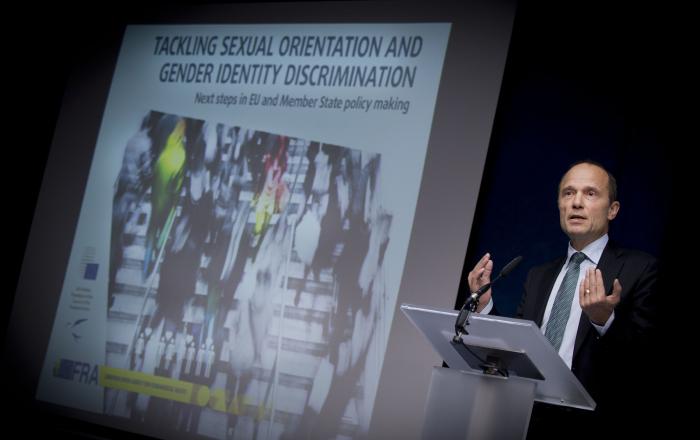