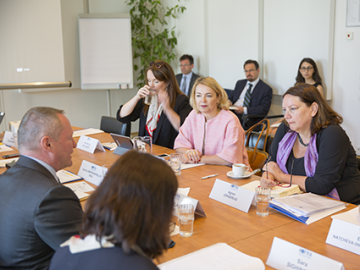 A delegation from the European Parliament’s Employment and Social Affairs Committee (EMPL) visited the Agency on 9 May to explore how to further strengthen cooperation with FRA and how the Agency could support the Committee’s work.

Discussions revolved around the major policy and legislative initiatives the Committee is currently working on and how FRA can best support this. They were particularly interested in hearing about FRA’s work on severe forms of labour exploitation, an area of concern that affects EU and non-EU nationals across many Member States. In September, FRA will launch key findings from the second phase of its project in this area that focuses on the workers’ perspective. Child poverty, disability and some of the Agency’s large-scale surveys, were also covered.

FRA also presented its work on the EU’s Charter of Fundamental Rights with a special focus on social rights. Discussions revolved around how all EU bodies and Institutions can better promote the obligation to comply with the Charter. The use of EU funds was given as an example. This is an area the Agency is engaged in. It is carrying out awareness raising and training activities with national managerial authorities of European Structural and Investment Funds. These activities support national authorities fulfil their duty to comply with the Charter when using EU funds to improve Roma integration or to promote the de-institutionalisation and labour market inclusion for people with disabilities, for example.

FRA’s Fundamental Rights Forum in September was also mentioned. Its potential to address emerging concerns with respect to forced labour and to promote solutions that would ensure fair working conditions was raised.