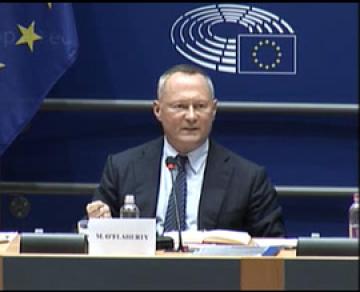 Protecting human rights is not an obstacle to combating terrorism was one of the FRA Director’s central messages to the European Parliament’s Special Committee on Terrorism. Instead, adopting a human rights-respectful approach can foster a safe society and boost security, as he outlined during his exchange of views with committee members during their meeting on 8 January in Brussels.

Michael O’Flaherty reminded members that even in times of heightened terrorism, the commitments towards human rights made by States under European and international law as well as in their national constitutions remain.

The Director went to illustrate how respect for rights can improve security by drawing on the Agency’s work.

He spoke of the need to counter hate speech, hate crime and discrimination, as some of the root causes of terrorism and radicalisation. Citing evidence from a recent survey that covered Muslim ethnic minorities and immigrants, he showed how hate-motivated harassment and violence as well as discrimination lower the overall high sense of attachment that this community normally feels towards their country of residence.

He advocated for approaches that engage local communities and also tackle socio-economic deprivation.

He also touched upon the question of interoperability of EU frontier databases. While interoperability can offer new possibilities, e.g. for tracing missing children, safeguards are needed that correspond with the sensitivity of the data collected. In, addition, interoperability should not amplify the problems of inaccurate or incorrect data that could result in false accusations or wasted time and resources chasing false leads.

The Director warned against framing migration as a security issue, a point also made by the EU’s Commissioner for the Security Union. While we must identify terrorists who hide among migrants, we should not question the right of asylum seekers to safety and humane treatment.

He referred to the EU’s Terrorism Directive with its in-built human rights safeguards. His concern was that the safeguards are properly transposed into national legislation. He mentioned the need to ensure respect for the Directive’s important provisions on protecting and supporting the rights of victims of terrorism.

The special committee was set up in July 2017 to address the practical and legislative deficiencies in the fight against terrorism across the EU, including the impact of the EU anti-terrorism legislation and its implementation on fundamental rights.