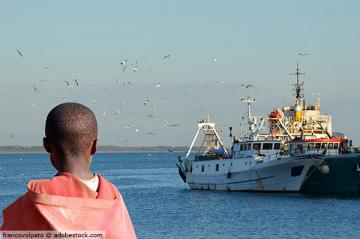 A look at the migration situation over 2018 points to hardship entering the EU, anti-migrant feelings and tougher asylum laws and policies, as the EU Agency for Fundamental Rights reports. However, it also acknowledges EU and Member State efforts to improve the situation of migrants and asylum seekers.

The ‘Beyond the peak: challenges remain, but migration numbers drop’ report looks into the fundamental rights of people seeking international protection throughout 2018. It draws on the agency’s regular migration updates in selected EU Member States.

The falling numbers reduced backlogs in processing asylum applications and helped improve reception capacity in some places across the EU.

Even though the number of migrants arriving continue to fall, many still die en route with 2,275 deaths reported last year. Civil society rescue attempts by boat faced difficulties trying to dock. This left migrants on board for longer than necessary putting their safety at risk.

In addition, there were reports of migrants, including children, being mistreated at border crossings and even refused entry unlawfully.

Violence and hate speech towards migrants remain an issue with a high number of attacks being reported by non-governmental organisations, the media and the police. Even so, hate crime is often largely invisible as many incidents go unreported.

In some places, intolerance towards migrants grew. This was not helped by some politicians voicing anti-migrant statements.

Tougher asylum laws and policies in some Member States are also an issue. These apply to areas like asylum procedures, the right to family reunification, reception conditions and welfare for asylum seekers. In some cases, the European Courts have been asked to assess whether changes remain within the scope of EU law.

And immigration detention rules become tougher. This negatively affected children. It risked comprising international and EU law, which allow detention of children only as a measure of last resort and for the shortest appropriate time.