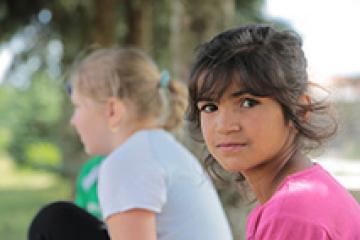 To find out why, FRA’s ‘Transition from Education to Employment of Young Roma in Nine EU Member States’ report explores the factors that are holding Roma back from receiving a good education and jobs.

It compared the situation in selected EU Member States between 2011 and 2016. Combined they have earmarked €1.4 billion of EU funds from 2014 to 2020 to help boost the social inclusion of Roma. However, to date the effect has been negligible. Employment for young Roma, particularly women, has scarcely improved, although education is slightly better.

Living in overcrowded housing, in segregated areas or at risk of poverty tend to increase the chances of young Roma stopping education before finishing upper secondary or vocational education. As 80% of Roma are at risk of poverty, ending poverty is key to helping Roma get a higher education.

For young Roma aged 16-24 the situation is particularly acute; as many as two-thirds of them are not in work, education or training. This is over three times the level of similar age groups among the general population in the countries FRA focused on.

Traditional gender roles also play a role. For example, there are twice as many working Roma men as women. This underlines the importance of providing early childhood education and care to allow more Roma woman to work.

However, it also underscored how education can help Roma escape the poverty cycle. As more and more Roma women are being better educated, it appears they are more likely than men to be in skilled permanent work.

The report also underlined how anti-Gypsyism and discrimination can lower employment prospects. It can result in poorer jobs with less job security, benefits and pay.