A year in review: looking back at FRA over 2017 - #FactNotFake 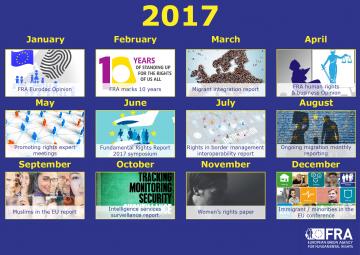 In 2017, the Agency marked its 10-year anniversary at a time when fundamental rights continue to be challenged. It was an opportunity to take stock of what has been achieved while acknowledging much still remains to be done to reposition respect for fundamental rights as a core value across Europe.

This exercise in reflection was very much in evidence in the anniversary event in Vienna where key figures past and present came together. They spoke of how the Agency has evolved into the EU’s centre of excellence for fundamental rights. They also recognised the need for the Agency to continue its core work and to be agile and timely to address emerging needs.

One of those areas was migration which remained a top priority right across the EU throughout 2017. In response, the Agency continued to provide on-the-ground support to the migration hotspots in Greece and Italy. This led to practical fundamental rights advice to EU actors and civil society organisations working directly with asylum seekers, refugees and migrants.

The Agency paid special attention to the needs of migrant children, a group that are especially vulnerable. For example, it provided guidance on how best to end migrant detention of children. This includes providing alternative housing, counselling, coaching and managing cases involving children better.

In parallel, over the course of the year the Agency collected data on the fundamental rights situation of migrants, asylum seekers and refugees arriving in EU Member States most affected by migration. These were compiled in monthly overviews, focusing on different themes, such as education and community policing.

Many migrants that have arrived in Europe have settled seeking a better life. But many barriers to their integration remain. In 2017, FRA’s second EU minorities and discrimination survey (EU-MIDIS II), which surveyed over 25,500 people with immigrant or ethnic minority background living across the EU, provided hard evidence (Follow #FactNotFake) of how discrimination and harassment remains widespread, nearly 10 years after the Agency’s first survey. 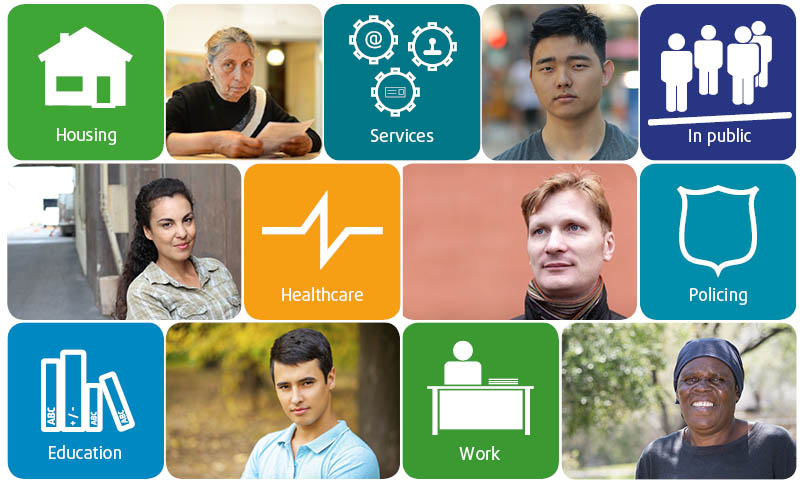 At the same time, the survey dispelled stereotypes by revealing that the overwhelming majority of people with immigrant and ethnic minority background have a strong sense of belonging to the country they now live in and trust its public institutions. But it also showed how discrimination and harassment experiences can undermine such feelings.

Further guidance on migrant inclusion and integration was provided through FRA’s Together in the EU report. It identified and compared policies across the EU in areas important for successful integration. These included education, reaching out to youths, political participation, non-discrimination and language learning.

Inequalities of a different nature were also examined by FRA in its paper on Challenges to women’s human rights in the EU, produced for the European Commission’s Fundamental Rights Colloquium. It called for renewed and stronger efforts by the EU and its Member States to promote gender equality and change societal attitudes to help eradicate discrimination and violence towards women. This need became even more apparent in the wake of the #MeToo campaign triggered by revelations of widespread abuse in the film industry, political arena and elsewhere.

To foster inclusion also requires changes in how to engage everyday people with fundamental rights. This is why over the year FRA convened a series of four expert meetings with diverse groups such as artists, communicators, religious bodies and different civil society actors. These meetings underlined the importance of reframing how people perceive rights through engaging with the arts or changing the way we communicate rights. In addition, they highlighted the need to rediscover the shared space between human rights and religion, as well as countering the many ways support for civil society is being eroded.

Security is a major concern for many Europeans and is high on the EU’s political agenda. The Agency fed into relevant policy debates providing targeted advice on how to respect fundamental rights through adequate safeguards. It looked at the pros and cons of sharing information among EU borders and security IT systems. These included improving efficiency but at the risk of unauthorised access or hacking. Such advice aimed at helping to shape future developments as these systems go online.

In this context, the Agency released its second surveillance report. It explored legal changes since the first report came out in 2015 examining the views of intelligence experts and controllers themselves to see how these laws governing surveillance work in practice. It showed that while reforms to surveillance laws are improving transparency, better checks and balances are still to match the powers of intelligence services are needed.

Next year, the Agency will once again hold its Fundamental Rights Forum under the theme of ‘belonging’. Building on the success of its 2016 event, the landmark fundamental rights event will focus on strengthening the ties that bind everyone in the EU to the societies they live in. It will demonstrate that human rights are for everyone and must be respected by everyone. Increasing the sense of belonging will be greatly facilitated when partnerships are enhanced among communities and institutions that rarely engage with each other. The Forum aims to provide the space for this to happen.