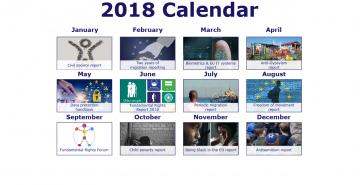 The year 2018 saw many significant anniversaries in the world of human rights. It was the year that the Universal Declaration of Human Rights turned 70 and the European Convention on Human Rights 65.

It was also the 25th anniversary of the World Conference on Human Rights and the resulting Vienna Declaration and Programme of Action, which arguably provided the necessary kick-start that led to the establishment of the EU Agency for Fundamental Rights.

What should have been a year to celebrate these achievements continued to witness ever-growing intolerance and challenges to human rights. And yet, as the FRA Director Michael O’Flaherty told the European Parliament’s LIBE Committee in November, even in these dark and very worrying times for the state of human rights, there is nevertheless “a strong hard-nosed reality-based optimism and certainly a sense of direction”.

In 2018 the Agency rose to meet those challenges facing the human rights world with a broad range of dynamic activities and numerous outputs. It also appointed a new Scientific Committee – the guarantor of the quality of the Agency’s work – whose term of office started in June. All of this took place against the background of the most significant ever restructuring of the Agency, to enable it to work more effectively, better fulfill its mandate and also resulting in an equal gender balance in the senior management team.

Special mention deserves to be made of the 2018 Fundamental Rights Forum which took place in September in Vienna. This event – the most ambitious ever organised by the Agency – brought together around 700 people to participate in rich and varied discussions and innovative activities such as an Ideathon where artists explored the power of using emotions when communicating about human rights, and a Virtual Zone demonstrating how digital tools can enhance the power of communication. Key outputs of the Forum included the Chair’s Statement and the FRA’s 10 keys to effectively communicating human rights, which was launched at the event.

Throughout 2018, various pioneering FRA studies and innovative tools pointed to the need to regain momentum for human rights.

Its antisemitism report revealed widespread and persistent harassment, which leaves many Jews fearing for their safety with thoughts of emigration. A new database on anti-Muslim hatred provided information, reports, data and resources on issues faced by Muslims in the EU today. The Agency’s ‘Being Black in the EU’ report painted a picture of racism and unbelievable prejudice in 21st century Europe as black people experience difficulties in finding somewhere to live or getting a decent job simply because of the colour of their skin. And its anti-Gypsyism report revealed how Europe’s Roma continue to live life at the level of people in the world’s poorer countries due to persistent inequalities that result in poor sanitation, hunger, and youth unemployment.

In addition, many civil society organisations, often the champions of the underprivileged and underrepresented, are being threatened or under pressure in many parts of the EU. A FRA report drew attention to the various challenges civil society is facing that undermine democratic processes and human rights in Europe.

Several new publications also underscored the Agency’s growing work on fundamental rights aspects of the digital technologies that affect all aspects of life. An updated guide on data protection European law will help anyone involved in the field to make better sense of the recent changes in this area. A focus paper explored the potential for discrimination in using big data for automated decision making, and automated decision-making also featured in the updated guide on how to avoid unlawful profiling.

A full listing of all FRA publications in 2018 can be found on the Agency’s website.

In 2018, supporting the implementation of the Sustainable Development Goals – with particular reference to those on equality (Goals 5 and 10) and strengthening of institutions (Goal 16) – remained a priority for the Agency. FRA is exploring how to support the EU and its Member States by providing evidence in monitoring progress on achieving the SDGs. The Agency is committed to contributing data analysis and expertise to help measure the implementation of human rights in practice – a fact underlined by the Director in his address to the World Bank in November.

Migration remained a key issue in 2018 for the Agency, which continued to publish its regular updates on the migration situation in Europe, as well as providing expertise relating to the situation at the hotspots in Greece and Italy. In addition, the EU legislator assigned to the Agency the task of participating in the Fundamental Rights Guidance Board of the newly-established European Travel and Information System (ETIAS) - the fifth instrument of secondary EU law assigning a formal role to the Agency.

The FRA will publish a look ahead to its planned activities for 2019 on this website at the start of the New Year.