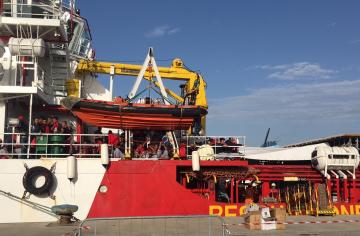 The FRA Director Michael O’Flaherty visited Italy from 14 to 18 September to assess the evolving migration situation in the Central Mediterranean and the need for further FRA support.

The Director visited the hotspot in Pozzallo (Sicily), met with representatives of EU agencies and the Italian authorities operating the hotspots, as well as with border guard units undertaking search and rescue operations. Speaking to NGO staff working in the hotspots, he also witnessed the invaluable role played by non-governmental actors in providing specialist support to the migrants and refugees, particularly to children and vulnerable people. He also witnessed a disembarkation operation and had debriefing meetings with the European Commission and the Ministry of Interior in Rome.

Parallel to the continued engagement in the hotspots in Greece, the Agency is committed to supporting Italy as one of the frontline countries which is most affected by the migration situation. The visit served to identify priority areas for action, including the need for capacity building, engaging with all actors, on such issues as guardianship for unaccompanied minors and protecting victims of trafficking and sexual and gender-based violence.

FRA, in cooperation with the Ministry of Interior and the European Commission, will also continue supporting new hotspots being set-up in Italy by helping to build the capacity of new staff to apply hotspots procedures in a rights-compliant manner, paying particular attention to vulnerable people.