Migrants continue to suffer from harsh stance in Member States 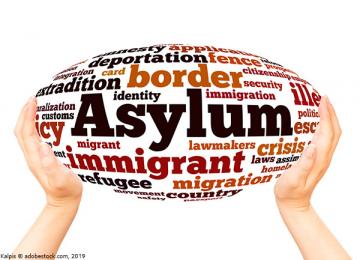 Migrants’ fundamental rights continue to be challenged by a tightening up of national policies and laws towards migration, finds FRA’s latest report. It highlights emerging concerns as support for healthcare and housing is cut as well as perennial problems resulting from overcrowding and asylum processing.

Yet again, the report points to examples in some Member States of changes in their position towards asylum seekers and migrants that negatively affects migrant lives.

For example, the Danish Parliament passed a bill in which all residence permits for refugees and their family members are temporary. It also foresees limiting the number of residence permits issued for family reunification if asylum applications in Denmark grow significantly in a short time period. Sanctions for rejected asylum seekers who do not stay at their designated centre will be tougher, leading to 40 days in prison in some cases.

In Greece, some people who were granted refugee status before 31 July 2017 will no longer receive housing assistance. This could lead to an increase in homelessness and hamper access to some services, such as continued education for children.

In Germany, social services are refusing to reimburse hospitals for emergency treatment of irregular migrants. In some instances, access to healthcare depends on the outcome of asylum procedures. In addition, it was reported that on average asylum seekers had to wait over seven months for access to psychotherapy, and 45% of applications for psychotherapy were rejected at the start of 2019 compared with 35% in 2018.

Elsewhere, there are new tougher asylum proposals in Austria. These include: housing in departure centres during admission; curfews; 20 days for asylum procedures which can hamper the proper scrutiny of claims; the withdrawal of asylum for certain criminal acts; and preventative detention for some asylum seekers.

Migrants’ living conditions remain a persistent problem. This is particularly acute in the migration hotspots on the Greek islands where, for example, the reception and identification centre on Samos hosts five times as many people as its capacity. In Serbia, overcrowding is also a concern. Meanwhile, in France, living conditions continue to worsen for people staying in informal camps in the North of France and in Paris, affecting their health and psychological well-being.

Procedural delays during asylum processes remain an issue in various Member States such as Croatia, France, the Netherlands and Spain. For example, asylum seekers in the Netherlands had to wait 16 months before their asylum procedure started in January 2019; this could increase to 24 months in the first half of 2019.

In Austria, it was the quality of second-instance asylum decisions that remains a concern and the right to be heard is not always guaranteed. In North Macedonia, ineffective asylum procedures rarely result in positive decisions and the individual circumstances of each applicant are rarely assessed. For example, no positive asylum decisions were issued during the first three months of 2019.

Poor procedures were also reported in Poland. Many asylum seekers and other migrants continue to end up in immigration detention as a result of poor identification and referral mechanisms. This is despite the fact that victims of violence should not be detained according to Polish immigration and asylum law.