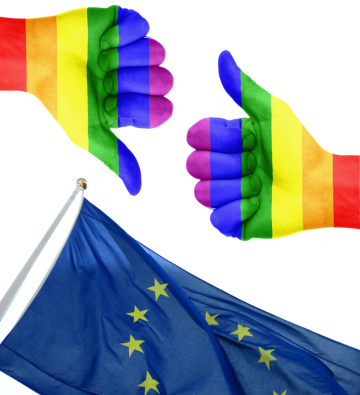 The protection of the fundamental rights of lesbian, gay, bisexual, trans and intersex (LGBTI) people has been steadily improving in many EU Member States, according to the latest comparative legal update from the EU Agency for Fundamental Rights (FRA). However, in some countries progress is slower. Trans and intersex people particularly face difficulties. Such problems and the differences in legal protection across EU Member States confirm the need to address the gaps in legal protection, as also flagged in the European Commission’s list of actions to advance LGBTI equality presented on 7 December.

“FRA’s legal analysis of the fundamental rights situation of LGBTI people shows there has been progress in some areas,” says FRA Director a.i. Constantinos Manolopoulos. “However, it also reveals persistent barriers that need to be lifted to allow all LGBTI people fully enjoy their rights.”

The report ‘Protection against discrimination on grounds of sexual orientation, gender identity and sex characteristics in the European Union: Comparative legal analysis’ reveals key developments and trends in the legal protection of fundamental rights of LGBTI people across the EU. Examples include:

Overall, the report acknowledges the encouraging legislative developments that have occurred since 2010. However, it also points to the challenges that remain. Added to the fear, isolation and discrimination LGBTI people face in their daily lives revealed in FRA’s EU LGBT survey, it underlines how many LGBTI people would benefit from greater efforts by the EU and its Member States to address the European Commission’s list of actions to advance LGBTI equality.