Non-judicial complaints mechanisms such as National Human Rights Institutions (NHRIs), Equality Bodies and Ombudsperson institutions provide an important avenue for seeking redress in cases of alleged violations of fundamental rights. In some cases they may be more accessible than judicial mechanisms, with bringing complaints less costly for the complainant and the proceedings faster than the court system. This indicator identifies those Member States where national non-judicial redress mechanisms have addressed an alleged violation of the political participation rights of people with disabilities over the period 2000–2013. An overview of the cases identified is presented in Annex 3 of the report.

The ability of such organisations to protect human rights by receiving, investigating and resolving complaints rests on both whether they are competent to receive complaints and whether a particular issue is covered by their mandate. Equality bodies, for example, focus on issues of discrimination so to be admissible a case related to political participation of persons with disabilities would need to be based on discrimination on the grounds of disability.

As with the previous indicator, evidence of complaints may indicate barriers to the political process but also demonstrates awareness that such barriers need to be challenged. Conversely, an absence of complaints is unlikely to indicate an absence of barriers to participation. As the CRPD raises awareness of the rights of persons with disabilities and national human rights bodies are strengthened in the area of disability, the number of cases may rise.

Have non-judicial complaints mechanisms considered cases related to the right to political participation of persons with disabilities? 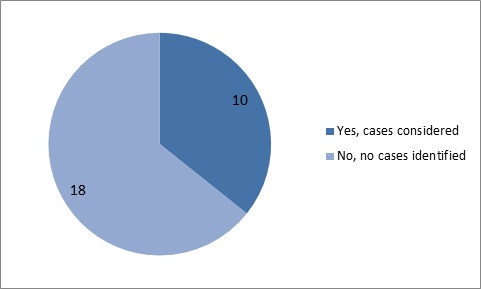 Cases related to accessibility of polling stations were identified in Austria, Bulgaria, Hungary, Slovenia and Sweden. Two cases concerning barriers to entering polling stations were filed with regional offices of the Federal Social Welfare Office in relation to the 2008 parliamentary and the 2010 presidential elections in Austria. In both cases the parties reached agreements through conciliation procedures. The Equality Ombudsman in Sweden received four complaints about polling stations that were inaccessible for persons using wheelchairs during the 2009 European Parliament elections. The investigation confirmed that inaccessible premises were used in four municipalities and argued that, based on the results of the investigation and in light of the requirements of the Election Act and the CRPD, the cases should be forwarded to the relevant authorities.

In Malta, Slovenia and Spain, this research found cases linked to the accessibility of information regarding elections, specifically for persons with visual and hearing impairments. In 2013, the Deaf Persons Association filed a complaint with the National Commission on Persons with Disability in Malta about the lack of Maltese Sign Language interpretation on national television during an election broadcast. As a result of the complaint, the Broadcasting Authority included Maltese Sign Language interpretation in its broadcasts on the elections. Following the 2011 parliamentary elections in Slovenia, the Advocate of the Principle of Equality received a complaint concerning the lack of information provided by the National Electoral Commission on how persons with disabilities could exercise their right to vote. Following an investigation, the Advocate produced an opinion stating that the information provided by the commission was not accessible to people with disabilities, which amounted to indirect discrimination on the ground of disability.

In addition to investigating specific cases, bodies with a mandate to promote and protect fundamental rights may issue recommendations to public authorities on particular rights issues. In 2012, the Ombudswoman for Persons with Disability in Croatia sent a written opinion and recommendations to the Ministry of Public Administration regarding election legislation, including the importance of ensuring the accessibility of polling stations, support for persons with a disability and guaranteeing voting rights for persons deprived of their legal capacity. During the period 2000–2010 the Human Rights Defender in Poland attempted to increase the respect for the rights of people with disabilities to political participation by sending letters to various public authorities, including the parliamentary speaker and the National Election Council.