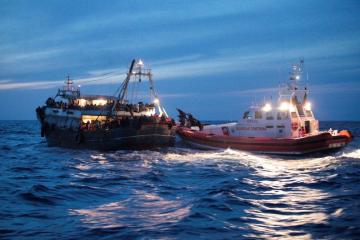 On 4 August, 102 people, including four pregnant women, one injured woman as well as a five-month old baby were rescued by a tanker, the M/V SALAMIS, in the Libyan search and rescue area.

The ship, which continued towards Malta, was not allowed to enter Maltese waters to disembark the migrants. The rescued migrants have been on board for three days. FRA welcomes the swift agreement between Malta and Italy that will uphold the rights of these migrants.

“Migrants who have already had the trauma of being rescued at sea should not also suffer the indignity of being pawns in legal disputes,” says FRA Director Morten Kjaerum. “Time and time again we see this happening. International human rights obligations should ensure the rights of rescued migrants are safeguarded and they receive the assistance and support they need. FRA is pleased to see the fast response by Malta and Italy that will allow these migrants to disembark.”

Earlier the European Commissioner for Home Affairs, Cecilia Malmström, had urged the Maltese government to take swift action and allow the migrants to disembark on their territory.

In its 2013 report on Fundamental rights at Europe’s southern sea borders, FRA underlined the unacceptable consequences of delays in disembarkation for rescued migrants due to unclear rules in international law. In one of the examples from the report, over 100 migrants were stranded on a vessel under NATO command for several days in July 2011, as Malta, Spain (the flag ship) and Italy debated where to take them. They were finally brought to a refugee camp in Tunisia. The FRA report concluded that in such cases all parties should make practical arrangements to allow for swift resolution of any disputes in full respect of the principle of not returning potential victims to a place where their life and safety are at risk.

The Maltese authorities had said the migrants should be sent to Libya as it was shipmaster's responsibility to return to Libya. The reasoning was that the maritime rescue coordination centre of Rome ordered the Liberian-flagged tanker M/V SALAMIS to take the migrants back to Libya when it was close to the Libyan coast. However, FRA’s report also concluded that none of the neighbouring coastal states in North Africa provide effective protection to people seeking asylum. It found that national authorities in such countries still do not have the capacity or willingness to adjudicate asylum claims in accordance with international standards. On 7 August the Maltese government announced that Italy had agreed to take the migrants and the tanker would head for Syracuse in Sicily.