Joint statement on International Day for the Elimination of Racial Discrimination (CoE, FRA, OSCE/ODIHR and ECRI) 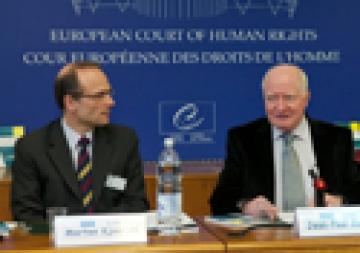 STRASBOURG, VIENNA, WARSAW 21 March 2011 - In a joint statement on the International Day for the Elimination of Racial Discrimination, Nils Muiznieks, Chair of the Council of Europe's European Commission against Racism and Intolerance (ECRI), Morten Kjaerum, Director of the European Union Agency for Fundamental Rights (FRA), and Janez Lenarčič, Director of the OSCE Office for Democratic Institutions and Human Rights (ODIHR), strongly condemned manifestations of racism and related intolerance.

"Today we jointly commemorate the tragic events of 1960 in Sharpeville, which led to the adoption of the United Nations Convention on the Elimination of All Forms of Racial Discrimination. On this day we renew our call to be vigilant in the face of acts motivated by racism and xenophobia".

"On a positive note, we acknowledge with great appreciation that in some European States, surveys show that tolerance and the rejection of discrimination are on the increase. These positive developments need to be strengthened and stimulated, since discrimination and victimisation still remain far too widespread. At the same time, levels of reporting by victims of racist assaults, threats or serious harassment and awareness of how to access redress mechanisms remains low."

"We are convinced that persistent racist and xenophobic speech from public figures and in the media can fuel prejudice and hatred against ethnic minorities and migrants, leading to discrimination in many areas of social and economic life, particularly in access to employment, health care, education, and housing. This creates a situation of social exclusion and, in some cases, leads to open hostility and violence."

"Our monitoring and research shows that the Roma are the ethnic group most discriminated against across Europe. In particular, our findings highlight recurring forms of stigmatisation of Roma communities in public discourse."

"We acknowledge that the primary responsibility to protect the rights of Roma lies with the States of which Roma are citizens or long-term residents. However, a coordinated response at the European level is needed to address the cross-border dimension of the problems that these people experience."

"We, the signatories of this statement, believe that to combat racism and xenophobia proactively, States should ensure, inter alia, that

Our institutions stand together to support and assist States in finding sustainable solutions at local, national, and European levels, through the provision of data, research findings, specialist advice, and coordinating support, on the basis of our complementary fields of expertise."