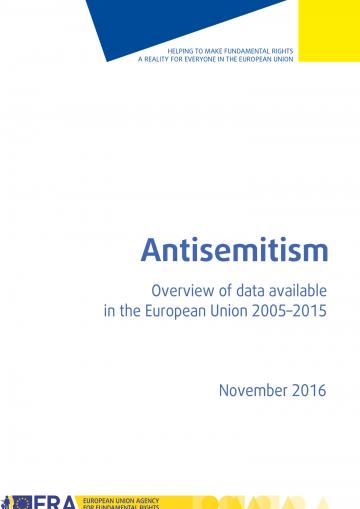 Antisemitism - Overview of data available in the European Union 2005-2015

Equality, non-discrimination and racism
Hate crime
Antisemitism can be expressed in the form of verbal and physical attacks, threats,
harassment, property damage and graffiti or other forms of text, including on the
internet. The present report relates to manifestations of antisemitism as they are
recorded by international organisations, and by official and unofficial sources in the
28 EU Member States.
Downloads
12 December 2016
Antisemitism - Overview of data available in the European Union 2005–2015 (934.09 KB)
Teanga
English
Order a printed copy from EU Publications website
Related
Report / Paper / Summary
Religion and belief
Equality, non-discrimination and racism
Hate crime
Racial and ethnic origin
3
November
2022

Antisemitic incidents and hate crimes violate fundamental rights, especially the right to human dignity, the right to equality of treatment and the freedom of thought, conscience and religion. This report provides an overview of available data on antisemitism as recorded by official and unofficial sources in the EU Member States and in Albania, North Macedonia and Serbia. The data provided by the countries are supplemented with information from international organisations.
Read news item
Download all overviews

‘Official data’ are understood here as those collected by law enforcement agencies, authorities that are part of criminal justice systems and relevant state ministries at the national level. ‘Unofficial data’ refers to data collected by civil society organisations.

This annual report compiles the available evidence on antisemitic incidents collected by international, governmental and non-governmental sources, covering the period 1 January 2005–31 December 2015, where data are available. In addition, it includes a section that presents evidence from international organisations. No official data on reported antisemitic incidents in 2015 were available for eight Member States by the time this report was compiled in September 2016.