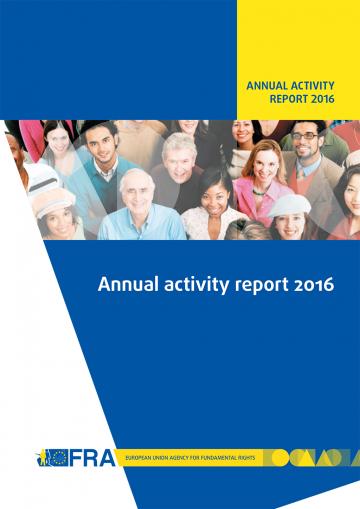 In 2016, FRA strongly focused on fundamental rights challenges arising due to the significant increase in refugees and migrants coming to the EU. In response, FRA rearranged its priorities and stepped up its activities in the area of “Immigration and integration of migrants, visa and border control and asylum”. In 2016, FRA continued to provide monthly overviews of migration- related fundamental rights concerns in the EU Member States most affected by the increased number of people seeking international protection and asylum, focusing on particularly vulnerable groups such as children and families. Other research sectors also put a greater focus on issues related to migration, for example rights of migrant children or safeguarding fundamental rights in the context of security and migration.

In line with its mandate and its objective to provide assistance as well as to formulate evidence-based advice in the form of opinions to the EU institutions and Member States, FRA offered its expertise at 484 presentations and hearings at EU and Member State levels, as well as at events that other international organisations organised during the year. The agency itself organised 124 events, bringing together its key partners and stakeholders to discuss fundamental rights issues in various thematic areas.

FRA maintained its efforts to present its findings in an accessible and user-friendly manner. It consistently provided information on fundamental rights challenges and promoted fundamental rights safeguards throughout the year. To reach a wider audience, the agency increased its use of different social media platforms. For publications, FRA was the highest-ranking EU agency in terms of EU Bookshop orders in 2016. In total, FRA published its research findings in 306 publications, including reports, papers, handbooks, online publications, fact sheets etc., which its stakeholders received well and used widely. Overall, the agency disseminated some 73,419 print publications to interested stakeholders in 2016.

Several FRA findings fed into the work of EU institutions and Member States, including references in several European Parliament resolutions and different Council of the EU documents. The highlights of 2016 include the following: FRA chaired the network of EU Justice and Home Affairs (JHA) agencies; it submitted six legal opinions to assist the European Parliament in the development of its positions on legislative files or policies; the European Commission’s directive that aims to enhance the existing European Criminal Records Information System (ECRIS) took into account some of the safeguards that FRA suggested in its opinion of December 2015; based on FRA’s Fundamental Rights Report, in June the Council adopted conclusions on the application of the Charter of Fundamental Rights and the European Parliament adopted a resolution on the situation of fundamental rights in the European Union in 2015, which contains 20 references to the findings and work of FRA. During 2016, the agency has seen a 600 % increase in official requests by EU institutions for legal opinions1 to be drafted by the agency concerning key files in the field of asylum, migration and border control.

Furthermore, FRA closely cooperated with the European Commission services — for example, by providing an overview of fundamental rights challenges relating to border management, returns and readmissions in Member States, providing fundamental rights expertise at quarterly meetings on the implementation of the EU Action Plan, setting up a subgroup on methodologies for recording and collecting data on hate crime or providing capacity-building workshops on equality indicators. Since April 2016, the agency has deployed staff on extended missions to Greece, looking particularly at child protection issues, identification of vulnerable people, and respect of procedural safeguards in asylum, detention and return proceedings. The success of the agency’s input has led to increased demands for its presence in Greece. FRA recently signed a memorandum of understanding with the Greek authorities envisaging a number of activities for 2017 and beyond.

FRA conducts its operations in full compliance with the applicable laws and regulations, working in an open and transparent manner and meeting a high level of professional and ethical standards.

In conclusion, management has reasonable assurance that, overall, suitable controls are in place and working as intended; risks are being appropriately monitored and mitigated; and necessary improvements and reinforcements are being implemented. The Director, in his capacity as Authorising Officer, has signed the Declaration of Assurance.