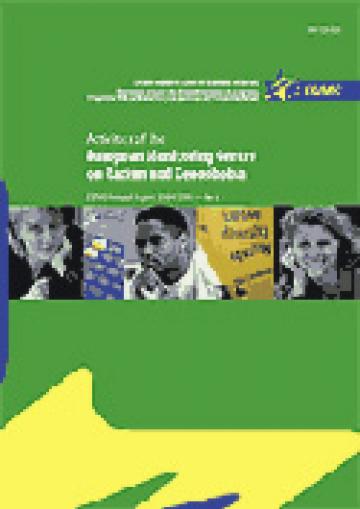 Equality, non-discrimination and racism
This annual report of the Agency is the EU's first comprehensive overview of racist, xenophobic, antisemitic and anti-Muslim discrimination, and responses to it, to cover all 25 EU Member States. The Roma emerge as the group most vulnerable to racism in the EU. They face discrimination in employment, housing and education - as well as being regular victims of racial violence. Other groups facing high levels of discrimination in many Member States are migrant workers from Africa, the Middle East, Asia, and Latin America. Muslim groups face particularly challenging conditions in many Member States. Also recent migrants from Russia or the Ukraine may be subject to discrimination in some Member States.
Downloads
10 August 2012
Jahresbericht 2005 - Rassismus und Fremdenfeindlichkeit in den EU Mitgliedstaaten - Trends, Entwicklungen und bewährte Praktiken (770.53 KB)
Sprog
English
Sprog
French
Sprog
German

The Agency's report lists a number of policy initiatives and measures which could promote equality, combat racial discrimination and encourage better relations between majority and minority communities:

The Agency presented its Annual Report 2005 to the European Parliament on 23 November 2005. The report looks at the evidence of discrimination in employment, housing and education, as well as racist crime data, and at measures being taken to combat this. Across the EU, the EUMC finds migrants and minorities to be overrepresented in the less prestigious employment sectors. Segregation in the housing sector is particularly prevalent in some Member States. Also educational achievements of a number of migrant and minority groups lag behind the majority population. The Agency warns that data gaps may result in serious discrimination in key areas remaining unnoticed. The report lists examples of best practice aimed at combating the exclusion of minorities.