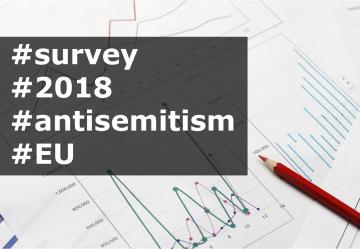 “Antisemitism remains a grave worry across Europe despite repeated efforts to stamp out these age-old prejudices,” says FRA Director Michael O’Flaherty. “This repeat survey gives Jews in Europe the chance to share their concerns and policy makers valuable feedback on how their efforts to curb antisemitism have progressed and importantly what still remains to be done.”

“The new FRA survey offers Jews across Europe a rare opportunity to share their perceptions and experiences of antisemitism with key politicians and policy makers both in their home countries and across the European Union, European Commission and European Parliament,” says Dr Jonathan Boyd, Executive Director of the Institute for Jewish Policy Research. “Few surveys have such a direct tie in with the formation of new policy, so one clear way Jews can do something to address any concerns they may have about antisemitism is to participate in this study.”

This is FRA’s second survey of discrimination and hate crime towards Jews. This time it will be more extensive; Jews living in 13 EU Member States will be invited to take part from mid-2018 with results expected later that year. The countries covered will be Austria, Belgium, Denmark, France, Germany, Hungary, Italy, Latvia, the Netherlands, Poland, Spain, Sweden and the UK.

The 2012 survey was the largest ever study of European Jews covering 9 Member States. Since the results were published, it has had a significant policy impact across Europe. Most notably, it strongly informed the conclusions of the EU’s Justice and Home Affairs Council on combating hate crime in the EU, and the decision to appoint the European’s Commission’s first antisemitism coordinator to help combat antisemitism across Europe.

As in 2012, FRA has contracted the UK-based Institute for Jewish Policy Research (JPR) and the international research agency, Ipsos, to carry out the survey, following a competitive tender process.