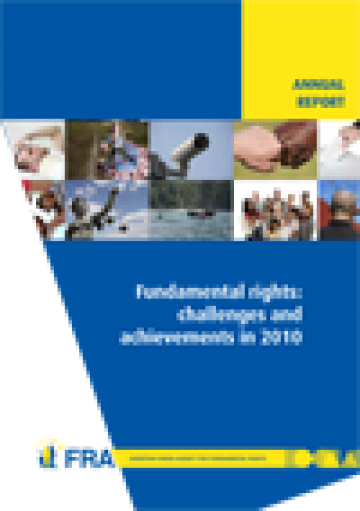 Fundamental rights: challenges and achievements in 2010, the flagship Annual Report of the European Union Agency for Fundamental Rights (FRA), charts the progress made in 2010 by the European Union (EU) and its Member States towards securing the rights guaranteed by the Charter of Fundamental Rights through developments in legislation, policies and practices. The FRA Annual Report, presented at the European Parliament today, points to promising practices and obstacles to rights protection across a range of policy areas. Some of the major challenges in 2010 related to asylum, the Roma and data protection.

FRA Director Morten Kjaerum: "While the Agency has collected numerous examples of promising practices among the Member States, there is still some way to go before the reality of the situation on the ground meets the standards guaranteed by the Charter of Fundamental Rights. Major fundamental rights challenges in 2010 included barriers in the way of getting access to justice, high levels of discrimination, as well as violence against children. The EU and its Member States must also face up to the marginalisation of the Roma, inadequate conditions for asylum seekers in particular at the EU's external borders, and threats to the protection of personal data."

2010 witnessed a fundamental rights emergency at the Greek-Turkish land border, where a large number of irregular border crossings into the EU took place. The Greek authorities have encountered significant difficulties in providing reception conditions that comply with fundamental rights standards, and in ensuring that migrants in need of protection have a fair chance to apply for asylum. The European Court of Human Rights has found detention conditions for migrants in Greece to violate Article 3 of the European Convention on Human Rights, which prohibits torture and inhuman and degrading treatment.

Member States experiencing high pressure migration will have difficulties in implementing their fundamental rights obligations, unless all Member States share responsibility through a Common European Asylum System, which is due to be completed by 2012 and will, therefore, require significant progress in 2011.

Roma experience lower levels of employment, poor housing conditions, barriers to health care and segregation in education systems. This prevents the Roma from enjoying a standard of living comparable to that of the general EU population. Efforts at the European and national levels must be stepped up to promote equality and combat discrimination. Through data collection, research and its expertise, the Agency is assisting the European Commission and the Member States to assess the impact of their policies to promote the inclusion of Roma. The report makes a number of suggestions on how to bring about the successful inclusion of Roma communities, such as ensuring that the EU Racial Equality Directive is fully enforced to combat discrimination in employment and access to services.

The events of 2010 highlight that there is a continuous need to balance the opportunities offered by new technologies to promote freedom of expression, cultural and social life, and free movement, against the potential threat to other rights. Google Street View, for example, attracted attention from law-makers and regulatory bodies in Austria, Germany, Italy, Slovenia and Spain because of the potential threat that it poses to privacy and data protection.

Similarly, the EU's Data Retention Directive, which obliges phone and internet companies to collect data about all of their customers' communications, has attracted opposition in several Member States. The constitutional courts of Romania and Germany have barred the application of national laws transposing the directive and the Commission has announced that this legislation is under review.