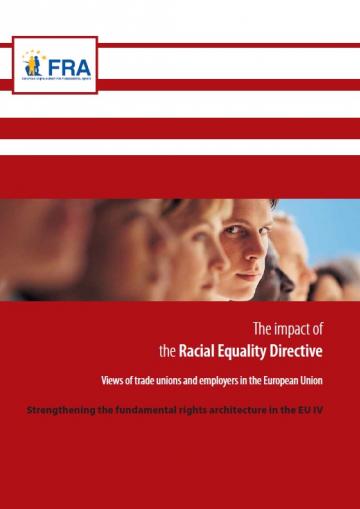 Equality, non-discrimination and racism
Racial and ethnic origin
Civil society
This report focuses on the views of Europe's employer organisations, trade unions and non-governmental organisations (NGOs) concerning the application of the Racial Equality Directive (2000/43/EC) in practice, with a sole focus on the area of employment.

Country Reports on the impact of the Racial Equality Directive: a survey of trade unions and employers

This summary report presents the ﬁndings of the FRA research on the views of the social partner organisations in the EU concerning the application of the Racial Equality Directive in practice, with a sole focus on the area of employment.

The Racial Equality Directive was adopted in 2000 and had to be transposed into each Member State's national legislation by 2003 (slightly later for the Member States that joined the EU in 2004 and 2007). The Directive has been transposed into the national law of all Member States, although shortcomings in the transposition have been noted in some countries. The Directive invites the Fundamental Rights Agency (FRA) to contribute to the European Commission's reporting on its impact on the ground. This report is the first in a series of reports to be issued by the Fundamental Rights Agency in 2010 on the impact of the Directive.

Trade unions and employers are encouraged to work together to combat racial and ethnic discrimination
Respondents viewed the EU as an important source of support for joint interventions between the social partners (trade union and employers' organisations), as well as for initiatives in individual workplaces and with civil society.