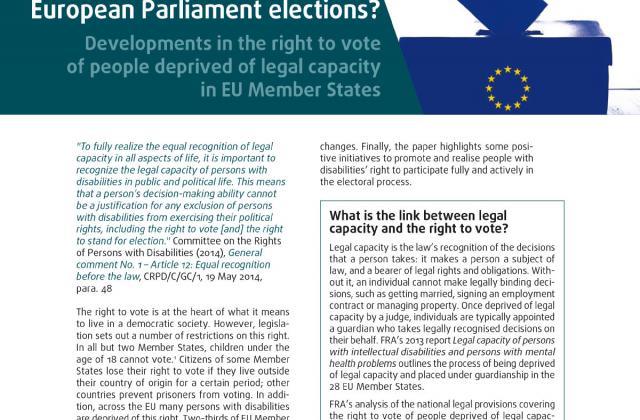 Who will (not) get to vote in the 2019 European Parliament elections?

The right to vote is at the heart of what it means to live in a democratic society. However, legislation sets out a number of restrictions on this right. With a view to the European Parliament elections in 2019, this paper presents developments in the situation of the right to vote for people deprived of legal capacity in the EU.

The report sets out by recalling the international and European standards favouring the full participation of persons with intellectual disabilities and persons with mental health problems in the electoral process. The comparative law analysis then highlights the diverse approaches adopted in the EU Member States. In a majority of these, persons who have lost their legal capacity are automatically deprived of their right to political participation.

Finally, a third group of EU Member States have moved towards full participation of persons with disabilities in the electoral process. The report provides some way forward to make sure that the standards in this area are applied in practice.