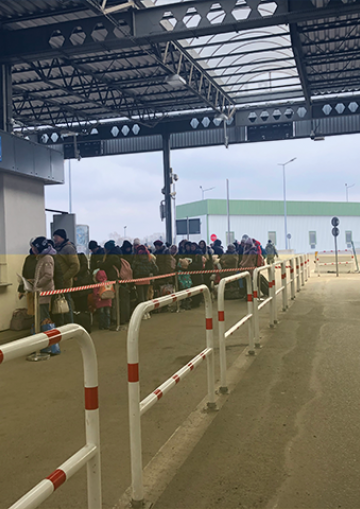 During the field visits, it was observed how the affected EU countries address the fundamental rights challenges of the humanitarian crisis. These field visits also allow FRA to calibrate its advice to EU institutions and Member States.

A particular focus was on procedures at border crossing points and registration/reception centres or assistance points to support those fleeing the war.

FRA staff witnessed overwhelming support to everyone fleeing from Ukraine. People were not only formally accepted into the EU, but officials and volunteers assisted them with kindness.

This short report highlights in particular how the EU countries coped with the fundamental rights challenges regarding:

While most people fleeing the conflict want to go back to their home country as soon as possible, this may not be possible and their stay in the EU may become much longer.

Therefore, EU countries should now start planning ahead. This will require extensive relocations across the EU, as well as integration measures and policies at EU, national and local levels. These will need to consider:

Since the beginning of the war in Ukraine on 24 February 2022, a large number of people are fleeing the war and are seeking protection in the EU. As a first step, FRA dispatched a team composed of Agency staff to the EU countries bordering Ukraine and Moldova to observe and collect evidence on the evolving situation.

FRA staff on these field visits speak the national languages and have expertise in migration, child protection, equality and non-discrimination and Roma inclusion. The team reported daily to the EU mechanism for preparedness and crises management on migration (Migration Preparedness and Crisis Blueprint).

Country officials, such as police or border police, facilitated the work of FRA staff. They provided access to all areas at border crossing points, such as passport control facilities, first and second line checks, and CCTV monitoring rooms.

Moreover, national and regional authorities facilitated full access to Reception Points and other coordination centres for humanitarian assistance, as well as closed reception facilities that were close to border crossing points.

FRA’s field visits to the border area took place between (3 and 14 March):

In all EU countries visited, civil protection and local authorities organise and operate Reception Points in towns, villages or cities close to the borders. Reception Points provide humanitarian aid for immediate needs. They also allow people to rest, usually for one day, before they continue their onward journey or are transferred to (larger) municipalities to arrange for a longer stay.

Overall, the coordination between state authorities (national, regional and local) appeared to work well. The efforts of civil society organisations and the many individual volunteers can be further enhanced to improve efficiency and impact.

In some of the visited locations, the provision of humanitarian aid, legal assistance and translations relies heavily on volunteers and local communities as the first responders. This is not sustainable in the long run and durable solutions need to be identified.

FRA met with international organisations, including UNHCR, UNICEF and IOM. They informed FRA about the focus of their presence and work in the field. We observed Blue Dot tents deployed by UNICEF in two border crossing points in Romania.

Allegations of discrimination and racism

During its field visits, FRA did not witness any incidents of discrimination or racism despite being aware of the many allegations of such incidents reported in the media.

Roma and third-country nationals that FRA staff spoke to did not make any complaint, including the way they were treated when departing from Ukraine. Three Roma families we spoke with did not report any mistreatment to us. They did not have passports, only quite old identity cards, and not for the children. They were nevertheless admitted, registered and provided with assistance for onward travel.

But as concerns reportedly have been raised about discrimination and racist or discriminatory incidents, FRA advises the authorities to be diligent to prevent such incidents. In case these occur, they should be promptly investigated. The Agency encourages civil society actors in the field to react and report any such incidents.

FRA observed many children and infants among those fleeing from Ukraine. This requires particular protection measures to ensure appropriate housing, as well as work opportunities combined with child care provisions, and access to healthcare.

Local authorities informed FRA of positive initiatives placing children immediately in classes of local schools. This helps to reduce stress as it gives children a sense of normality being occupied with various activities. It also allows their parents, mainly mothers, and relatives to rest. FRA advises that such initiatives are continued and replicated.

In the long run, language learning initiatives should be developed so that children can continue their education.

The European Commission announced that, as of 10 March 2022, all EU countries, Norway and Turkey, have offered in-kind assistance ranging from medical supplies and shelter items, to specialised equipment, vehicles and fuel.

Humanitarian aid is delivered both directly to Ukraine and through logistical hubs, such as those FRA visited in Poland. The Municipality of Przemyśl informed FRA of the need for better coordination between humanitarian hubs in the capital and those in the border region, such as the one in Przemyśl, to ensure the logistical distribution of the aid. Humanitarian hubs in the border region directly receive large amounts of humanitarian aid but struggle to distribute it due to an insufficient number of delivery lorries and drivers.

The local authority in Przemyśl receives a disproportionally large number of people fleeing from Ukraine. They asked for more practical support in the form of containers and foldable beds to accommodate the increased number of arrivals.

FRA advises that forms of cash assistance should be available as soon as possible. In Poland, for example, state vehicle insurance covers cars coming from Ukraine for 30 days. FRA recommends that other Member States should also consider such positive initiatives.

The risk of human trafficking is particularly high. Many volunteers offer transportation or housing outside reception facilities. Such offers bear particular risks for women and children. FRA pointed this out to all border authorities.

The Agency advised relevant authorities to make additional efforts to inform in simple and considered language about the risks of trafficking. People should be warned also orally during passport controls and advised not to accept non authorised rides or accommodation.

In many cases, FRA observed that municipal or other authorities checked and registered drivers offering transportation. But this was not always the case outside the Reception Centres or in train stations and bus terminals despite efforts by the police.

Authorities and civil society reported some cases of arrivals of unaccompanied children to FRA. This also included children living in institutions in Ukraine (about 100,000 children according to UNICEF data).

Children accompanied by grandparents or relatives usually had a letter from their parents authorising these persons to care for the child. Border authorities informed FRA that they generally check these cases. They speak to the children using interpreters to ensure that the child has actual links to the adult accompanying them.

Unaccompanied children are reportedly treated according to national law. As the competent authorities informed FRA, in Poland unaccompanied children are referred to the court who assigns a temporary guardian; in Hungary, they are referred to the Directorate-General for Social Affairs and Child Protection; in Slovakia and Romania they are placed in the care of municipal social services.

FRA advises the authorities that all children arriving unaccompanied should be immediately placed in protective care to avoid any risk of trafficking. Moreover, individual risk and best interests assessments should be carried out as soon as feasible for all unaccompanied children.

Since June 2017, Ukrainian citizens holding biometric passports can travel to the EU (Schengen Zone) without a visa for a period of 90 days within any 180-day period for business, tourist or family purposes.

Border authorities in Hungary and Romania informed border crossing points in airports and elsewhere to facilitate the onward travel of people fleeing from Ukraine in the EU or to exit the EU without a Schengen visa.

In all countries visited, FRA noted that border guards and customs officials, as well as military staff, actively supported people arriving in the EU. For example, they carried their luggage to onward transport and provided hot beverages, while working under particularly stressful conditions in 12-hour shifts and beyond.

Ukrainian nationals with a biometric passport were allowed visa-free entry.

But in practice anyone fleeing Ukraine was admitted with any form of identification, such as a driver’s license, after due checks.

Within 15 days, people fleeing Ukraine could apply for international protection or contact their embassy to be repatriated.

Note that during FRA’s visit of the border crossing points in Poland between 4 and 6 March 2022, temporary protection by Council Directive 2001/55/EC of 20 July 2001 was not yet available.

The Directive provides minimum standards for giving temporary protection in the event of a mass influx of displaced persons and on measures promoting a balance of efforts between Member States in receiving such persons and bearing the consequences thereof.

The Council Implementing Decision (EU) 2022/382 of 4 March 2022 establishes the existence of a mass influx of displaced persons from Ukraine within the meaning of Article 5 of Directive 2001/55/EC, and having the effect of introducing temporary protection.

Visa-free entry was allowed with any type of passport. Everyone received an entry stamp which allows them to stay in Slovakia for 90 days.

Those without any type of identity document were registered, fingerprinted, photographed and also allowed to stay 90 days based on the exception on humanitarian ground (Article 6 (5) (c) of Regulation (EU) 2016/399).

Ukrainian nationals, their spouse or partner, minor child and relatives living in the same household with biometric passport could stay and move freely within the EU for 90 days.

Persons without a valid biometric Ukrainian passport or a valid non-Ukrainian passport with Schengen visa (but still with some documents, including children’s birth certificate) were recorded, fingerprinted and photographed and issued with a ‘certificate for temporary stay’ (ideiglenes tartózkodásra jogositó igazolás) valid for 30 days. This certificate can be prolonged for another 30 days, each time up to six months.

Persons subject to an EU-wide entry ban, either issued by Hungary or another EU Member State, were also issued the certificate for temporary stay after consultation with the other Member State.

All citizens with any type of passport were allowed to enter without a Schengen visa and to continue their onward journey.

Those wishing to remain in Romania had to file an asylum application. This was because Romania, by 14 March, had not yet incorporated in national law the Council Implementing Decision (EU) 2022/382 activating temporary protection.

While most people fleeing the conflict want to go back to their home country as soon as possible, this may not be possible and their stay in the EU may become much longer.

Therefore, EU countries should now start planning ahead. This will require extensive relocations across the EU, as well as integration measures and policies at EU, national and local levels. These will need to consider:

Among civil society actors, established churches and charity services put in place extensive support facilities. They reacted very quickly and efficiently with good coordination among them and the authorities, particularly in Hungary.

Nevertheless, NGOs and other support organisations could be better coordinated at national, potentially also at EU level, to make better use of the generous offer of the many volunteers who work tirelessly to provide humanitarian aid.

A long-term sustainable solution is necessary to support volunteers and to ensure an adequate rotation of staff.