The protection of children's rights in judicial proceedings can require holding judicial hearings in the absence of the public. This is the so-called ‘closed-door’ rule. In some cases, the application of this rules lies within the discretionary powers of the court, or there are age limitations.

Corresponding data on privacy in court hearings in juvenile criminal justice can be found in the data explorer. In some EU Member States, the closed-door rule also applies in certain other judicial proceedings – such as, for example, in guardianship, adoption, custody or family cases.

For information on the age at which disclosing the identity of a child involved in judicial proceedings to media is explicitly prohibited by law, see our interactive data explorer. 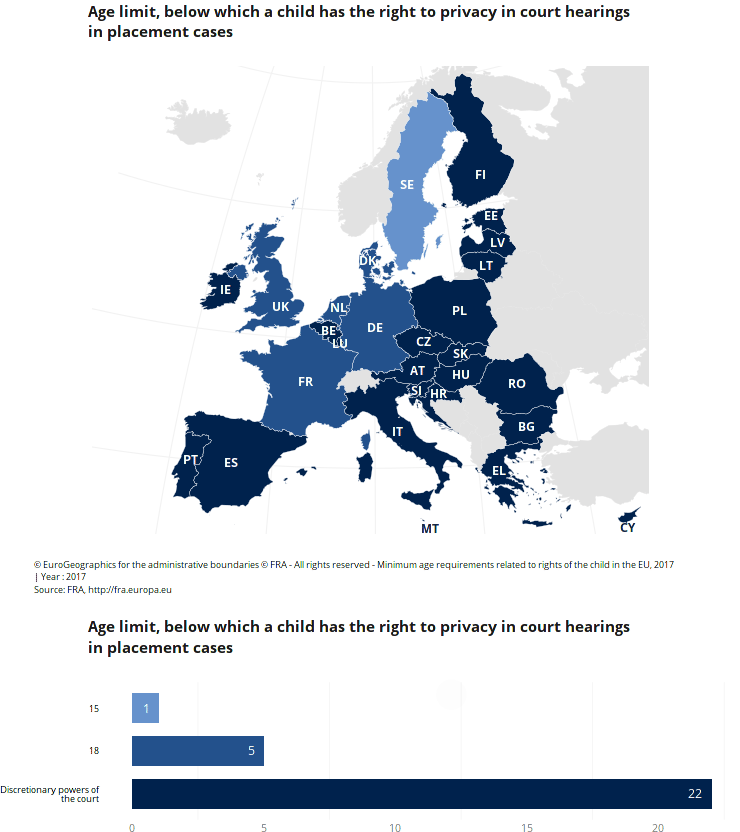 The right to privacy in judicial proceedings, or the so-called ‘closed-door rule’, is enshrined in Article 40 (2) (b) (vii) of the Convention on the Rights of the Child regarding criminal proceedings. Article 6 (1) of the European Convention on Human Rights, referring to the right to a fair trial, allows for excluding the press and the public from all trials, including in civil matters, “where the interests of juveniles or the protection of the private life of the parties so require”.

At EU level, both the Directive on special safeguards for children and the Victims’ Rights Directive contain provisions on the privacy of children participating in criminal proceedings (Article 14 and Article 21, respectively). The corresponding rules set by the Directive on special safeguards for children aim to prevent children’s stigmatisation and facilitate their social reintegration. The Victims’ Rights Directive aims to prevent secondary and repeat victimisation, intimidation or retaliation. The right to privacy during criminal hearings is applied to all children without any age considerations. However, Member States may either prescribe explicitly that court hearings involving children are usually held in the absence of the public; or leave this decision to courts’ or judges’ discretion.