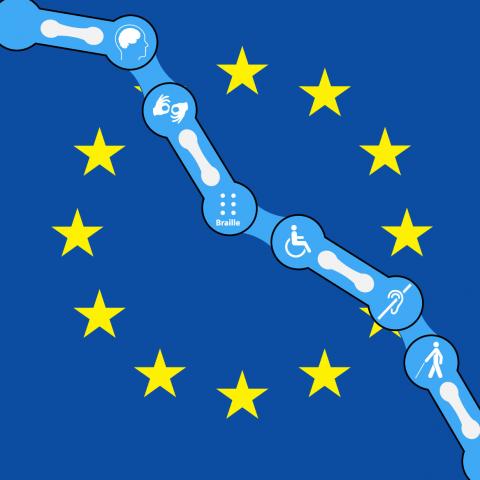 The United Nations Convention on the Rights of Persons with Disabilities (CRPD) is the first binding international human rights instrument to specifically address disability. Its aim is to "promote, protect and ensure the full and equal enjoyment of all human rights and fundamental freedoms by all persons with disabilities, and to promote respect for their inherent dignity".

The Convention is a powerful tool to help people with disabilities, local communities and governments explore ways of fulfilling the rights of persons with disabilities by developing and implementing legal, policy and practical measures.

In order to ensure that these efforts comply to the Convention’s requirements and are implemented effectively and efficiently, Article 33(2) of the UN Convention on the rights of persons with disabilities (CRPD) requires state parties to the convention to establish a framework to promote, protect and monitor implementation of the CRPD.

As a party to the CRPD, the EU has designated such a framework for matters of EU competence, including:

The EU Framework complements national monitoring frameworks, which are responsible for promoting, protecting and monitoring the CRPD in EU Member States.

Who are the members?

The EU Framework is composed of:

The European Commission was a member of the EU Framework until late 2015, when it announced its intention to withdraw following the publication of the Concluding Observations on the EU by the Committee on the rights of persons with disabilities (CRPD Committee). Following this announcement, the European Commission no longer participates in the activities of the EU Framework.

What do members do?

According to their respective competences and mandates, members contribute collectively to the:

of the implementation of the CRPD by the EU.

The EU Framework also contributes actively to the review of the EU’s implementation of the CRPD by the Committee on the rights of persons with disabilities (CRPD Committee). The CRPD Committee, the so-called ‘treaty body’ for the CRPD, is responsible for assessing whether parties to the convention are meeting their obligations under the CRPD.

The first review of the EU’s implementation of the CRPD took place in 2015; following the first review, the CRPD Committee announced that the second and third reviews will take place jointly as of 2020.

How does it work in practice?

Members share information and take account of each other’s activities. They agree on a work programme that can include activities implemented by several members together or by the Framework as a whole.

The Chair of the EU Framework is appointed for one year and is subject to a rotation system. The Chair promotes the principle of collegiality which is inherent to the Framework's working methods.

The EU Framework meets at least twice a year. Decisions are taken by consensus.

The EU Framework complements the national monitoring frameworks in EU Member States responsible for promoting, protecting and monitoring the CRPD and its implementation at national level. They can take various forms and be composed of several organisations, such as:

Some of the members of national monitoring frameworks cooperate at the European level:

Downloads
16 February 2022
Structures set up for the implementation and monitoring of the CRPD - 2021 update (54.3 KB)
Language
English